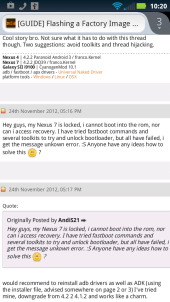 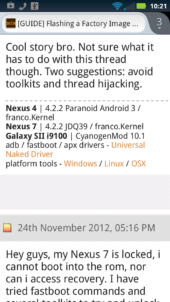 Mozilla released Firefox 19 this week for Windows, OSx, Linux and Android.  The release notes list the new features in the Android release as:

While I was poking around in the menus I noticed an option in the settings menu that  I don’t remember seeing before, “Pinch to reflow text“. It’s disabled by default, When you turn it on, text reflows to fit the window as you zoom in and out.

Reflow has always been a feature of the stock Android Browser, Opera Mobile and most other Android browsers, but not Firefox Mobile. It’s a real eyesaver on some some desktop sites that are almost unreadable because of a combination of wide text columns and small font sizes. The screen shots above show an example on XDA-Developers. The left image shows how the site looks when you double tap to initially fit the page’s text to the window. The font size is so small that I found it a hard to read. No problem, just zoom in a bit and Firefox reflows the text so it still fits the window and horizontal scrolling isn’t needed.

I did notice a couple of somewhat annoying issues with Firefox’s reflow. For one, the browser doesn’t maintain the current scroll position as you zoom in. If you are at the bottom of a long page and zoom in the browser will jump back to the middle of the page and you will have to scroll back down to find your place. The second issue is that zooming on one tab tends to effect the zoom levels on other tabs. Neither if Pinch to reflow text is turned off. Hopefully these problems will be fixed in a future release, text reflow on zoom is a really useful feature when browsing on small screens.

One thought on “Firefox Mobile 19 Gets Pinch to Reflow Text”