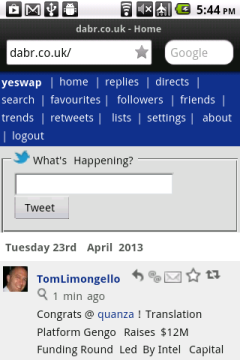 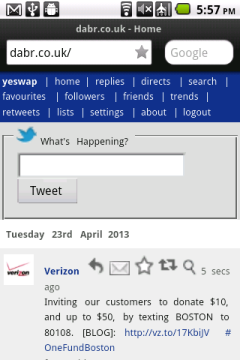 According to a post by an Opera employee on the My Opera – Opera Mini Forum the changes in this release are:

I upgraded to the new release on several devices. There definitely are some font changes. The font on many pages is noticeably smaller. The screenshots of the dabr.co.uk Twitter web app (above) and the My Opera Forum below show the difference. In both sets of images, the first one shows the old version and the second the new one. My old eyes prefer the previous version. I recommend you backup Opera Mini using an app like the free ES File Explorer before upgrading in case you don’t like the changes. 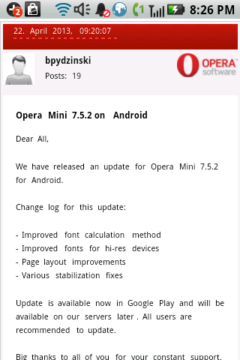 Opera Mini 7.5.2 is available now in the Google Play store. Opera’s forum post claims that it “…will be available on our servers later”. I hope that’s true, however Opera.com’s download page hasn’t offered direct downloads of any of Opera’s mobile browsers since it was redesigned earlier this year.

Other than having smaller fonts the new release seems good. It reportedly works better on tablets and may have even fixed the Black Screen of Death bug that afflicted the last couple of Opera Mini Android releases. That bug manifested itself when you restored Opera Mini to the foreground after it had been in the background for awhile. The screen would be completely back with no user interface at all. The only way to recover was to terminate Opera Mini with a task manager app or from the Android Manage Applications screen.

7 thoughts on “Opera Mini For Android Updated to Version 7.5.2”