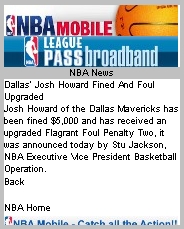 The NBA (National Basketball Association) season started Nov 1st. NBA.com has a mobile site at nba.mobi that lets you follow the games on the mobile web. It’s an OK site but I was hoping for a little more. NBA.com Mobile has league news, scores, schedules and statistics. The news items are mostly post-game wrap ups and are pretty short – just a sentence or two. The scores page lists all of today’s games with current scores, quarter and minutes to play. It lets you see how all the games are going at a glance but there is no way to drill down into a game and see the full box score and scoring leaders like you can on ESPN Mobile (mobileapp.espn.go.com/wireless/espn/xhtml/) or Fox Sports Mobile (fs.sorrent.com/fs/fe). NBA.com’s statistics list the top 5 players across both conferences in points, assists and rebounds. Mobile ESPN has a lot more, the top twenty in each conference in points, assists, rebounds, steals, blocks, field goal percentage, free throw percentage and 3 point percentage. ESPN also has statistics on every player in the NBA as part of it’s team specific pages. There’s little reason to bother with NBA.com’s mobile site as ESPN.com has everything on the NBA site and a much more.

A basketball fan named Ross has created a fun NBA mobile page called All-Time NBA Top 50 (home.swbell.net/hartley4/pocketnba.htm). Basically it’s an exhaustive list of the top 50 players all-time in a number of categories including points, rebounds, shots blocked, games played and about 15 more. There are also a couple of interesting articles by Ross on the site, one on how the 1998 strike keep some players from topping the record books and the other on the chances that anyone will ever break several notable records like Kareem Abdul-Jabbar’s 38,387 points or Wilt Chamberlain’s 23,924 rebounds. If you’re into bucket ball statistics, this is a fascinating mobile site.