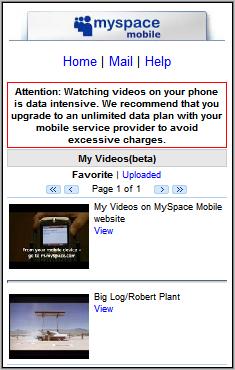 I just saw this on VentureBeat. MySpace has added video to their mobile site, m.myspace.com. Thanks to MySpace’s original association with bands and music, it has tens of thousands of videos, especially music videos. It makes sense to make them available on mobile.

I took a look at the mobile video offering and it is live and it works but it’s very limiting and not particularly user friendly.

To watch MySpace videos on your phone you have to jump through a number of hoops:

Perhaps I’m being too harsh with MySpace mobile video, after all it is a Beta. I’m sure more phones will be flagged as compatible soon and sharing videos on MySpace will become popular with YouTube members.  But MySpace is in decline as a social network.  They need to reinvent themselves and the MySpace video catalog gives them a great opportunity to do that both on the web and with mobile.

If MySpace really wants to succeed in mobile video they need to look at what YouTube has done. I haven’t seen any numbers on mobile video market share but my gut feeling is that YouTube is the leading mobile video site by a wide margin. YouTube is popular because of brand name recognition plus discovery and interoperability. Every video on the full YouTube site can also be viewed with any any video capable phone. Even better, the mobile and PC versions of YouTube videos can be accessed from a common URL, so every video linked in a blog post, on Twitter or found by a search engine is instantly available on mobile phones.

MySpace has great name recognition and I bet it could quickly become one of the leading mobile video destinations if MySpace followed YouTube’s example and opened up mobile videos to all phones and users and also automatically served mobile formatted videos to mobile users who followed a link to the full version of a MySpace video.