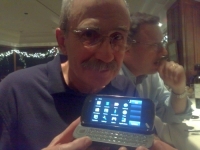 Yesterday after the Symbian Partners Event, I was invited to attend a “Bloggers Dinner”.  When I got an email saying dinner would be at the Carnelian Room I knew that my attire of Mobile Camp tee shirt and jeans wasn’t going to cut it.  Quick change to khakis and a collared shirt and I was off.

The Carnelian Room was a gas.  Best known for its view, it’s at the top of the 555 California tower, the city’s second tallest building. Our party was seated by a window with a great view of the Bay Bridge and Oakland/Berkeley skyline. Online reviews of the Carnelian’s food are rather mixed but I was very happy with my choices of a braised scallop appetizer, garden salad and swordfish dinner.

There were about 20 people at the dinner which was hosted by Symbian EVP for Research, David Wood. I took the opportunity to ask David how he would feel if, when the Symbian code is released in April, one of the Chinese manufacturers of iPhone clones paid the $1500 to join the Foundation and started producing Symbian phones.  David said that was exactly what he hoped would happen, at least as long as the OEM didn’t try to claim the phones were something they were not, like Nokias.  I also discovered that David has a blog, dw2-0.com. I visited it this morning and found he had just posted that all versions of Nokia’s Carbide C++ Symbian development platform are now available free of charge under the Eclipse Public License.  Great news and very much in keeping with the open source spirit. David is keen to increase Symbian’s market share in the US by making more unlocked Symbian phones available here and by delivering Symbian CDMA handsets, something I think is crucial in a market that is more than 50%  CDMA.

VentureBeat founder Matt Marshall asked David about the Symbian Foudation’s business model.  David said that the Foundation has funding for the next two years from the original partners and that they are exploring various revenue sources after that including advertising.

David cleverly had the guests switch places at the table after the first course to extend the networking effect.  I ended up getting a great hands demo of the N97 from Nokia’s Victor Briton.  It’s quite a bit smaller and thinner than I expected, about the size of the Nokia 5800 or Samsung Impuse.  Amazing that Nokia managed to get a slide out keyboard and a 5 MP camera into such a compact form factor.  The screen is great and I found the keyboard easier to type on than the G1 and AT&T Tilt.  I was warned that the the device was one of about 20 in existence and the software was “pre-Alpha” but I didn’t experience any issues.  A killer feature of the N97 is that Web Runtime Widgets can run on the idle screen and can update themselves to display things like stock quotes, weather or new IMs or Tweets.

I also spoke with Lester Madden, a Symbian Signed manger.  Application signing and Open Source seem somewhat at odds to me.  Lester believes that signing is necessary for native Symbian apps but he seems committed  to making it easier and more affordable for developers including those developing free applications.  I have no problem with signing as a value added process for vendors who want to certify the origin and integrity of their products.  However, I believe that in an open system the user, not the OEM, carrier or OS should get to decide what apps can be installed and what privileges they are granted.

There’s more on the event and the N97 on the web; TnkGrl with 13 pictures of the N97 and Mike Rowehl on the Symbian Partner Event,  bloggers dinner and Symbian Signed.

Based on what I saw and heard yesterday, I now have a much more positive view of open source Symbian.  It’s a lot closer than I though, we should see handsets this year. I expect Symbian to be a viable alternative to Android as a free and open platform for OEMs small and large and I hope to see a flood of new, inovative and low cost Symbian handsets arriving in years to come