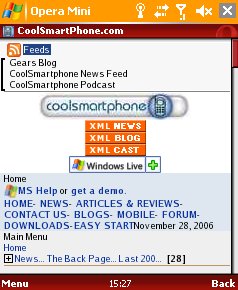 Two big mobile web and data related announcements today. Opera has released Mini 3.0 and Verizon announced a deal that will put some YouTube videos on the carrier’s V-Cast media player for EVDO subscribers.

Opera Mini is at 8 million users and Release 3.0 represents a significant upgrade. I’ve covered the 3.0 betas in some detail, the released version doesn’t add any features beyond the photo sharing, RSS feed reader and secure connections which were in the beta. It looks like the RTSP support didn’t make the final cut. Opera has made the release is a lot easier to download than the beta though. A new page at www.operamini.com has demos, help and screenshots plus links to all the download options. There are three ways to get Opera Mini 3.0

For more about the new Mini check out.

I’m less impressed with the Verizon / YouTube deal. Om Malik has a great piece on its lameness in Walled Garden, Not Going Away, in which he repeats this pithy quote from Fred Wilson,

“This deal violates the entire ethos of YouTube, not free, not open, exclusive, no community, limited, censorship, etc, etc.”

2 thoughts on “Opera Mini 3.0 and Verizon-YouTube”