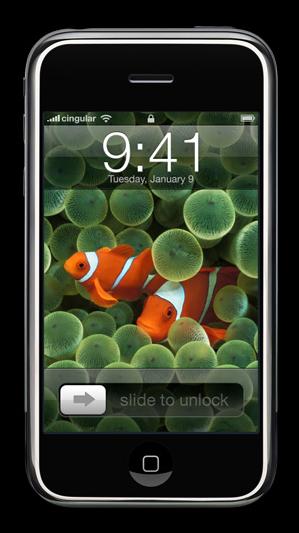 I saw the iPhone today at Macworld. It was playing a self running demo while slowly rotating inside a glass cylinder on a pedestal. There were two such displays on the show floor each guarded by at least two Apple reps and gathering 10 deep crowds of camera phone wielding fans. A very impressive device. The screen is gorgeous, vivid and incredibly sharp. The new multi-touch UI, if it works and is only half as intuitive and learn-able as it looks in the demos will become the standard against which any new device’s user interface will be compared unfavorably. I love that the web and IP data aware apps like Google Maps were so much a part of Steve Job’s presentation – the iPhone is going to introduce a lot of folks to using the web on a phone.

Still the iPhone is not perfect. A new phone of this class really should have GPS, 3G, removable storage and a 2D code reader. But features get left out to get a product to market and so a Version 2 with the missing features can be sold to early adopters as an upgrade. Still, the lack of GPS is particularly puzzling given the inclusion of Google Maps on the device. GPS chips are cheap. A $50 Boost prepaid phone running Loopt or the much superior Mologogo can find you on a Map but the iPhone costing 10 times as much requires you to key in your address!

I am also concerned about how open the iPhone will be to developers and hackers. TUAW has a piece claiming; iPhone Will Not Allow User Installable Applications! I asked two of the demo iPhone’s keepers at Macworld “Does Apple support the development of third-party apps for the iPhone”. One didn’t know and the other said that was still being decided. Both directed me to developer.apple.com which currently has no mention of the iPhone. But it’s early. Surely Apple recognizes that a mobile device this powerful, running a full desktop OS, demands a library of installable applications and that the quickest way to built that library is to open the API’s and provide development tools.

Yesterday I posted some links to sites with live coverage of the Macworld keynote and said that I was going to try to follow the presentation on my phone using Opera Mini and these sites. I have to say that it worked out great. Sitting on the floor in the underground tunnel between Moscone North and Moscone South I was amazed that I had full bars on my Sprint/Nextel/Boost Motorola i855. Is there a microcell down there? Anyway I was surrounded by hundreds of the Mac faithful, most of whom had laptops and were following the keynote too. There were visible wifi repeaters in the tunnel. I had no problem keeping up with the presentation using just my phone. I mostly used the so-called mobile version of Engadget’s site as it seemed to have the best commentary and gorgeous live photos. I say “so-called mobile” because Engadget’s mobile keynote page is almost 2 MB in size with 64 440px wide images. Opera Mini handled it with no complaints splitting the page into 3 sections and displaying every single image beautifully – Opera Mini rocks. I glanced at my compatriots laptop screens and most of them were browsing Engadget too. Great coverage, kudos to Engadget even if your mobile page is mobile in name only.

The iPhone was clearly the star of the show at MacWorld. The faithful in the tunnel were fairly subdued during Job’s Apple TV presentation but went wild when he announced the phone. There were separate hourly live demos of both Apple TV and the iPhone on the show floor. The TV demos were well attended but the iPhone ones drew much larger crowds. Well done Apple – but please open the iPhone to independent developers and sneak a GPS into it before release. Oh, and as long as I’m making demands, how about selling an unlocked “International” version without contract that we can use on any network?