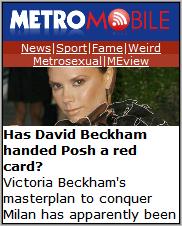 Metro a free print newspaper distributed on public transit systems in the UK.  In the nine years since its launch, Metro has become the fourth largest paper in the country with over a million daily readers.  Metro is also on the web at metro.co.uk and on the mobile web at metro.mobi.

The most interesting thing about Metro is its video section, MEviews. The video content costs 50p a clip to download and it’s all user generated. While this sounds like a bit of a rip-off, especially given that the same videos are available on the full-web Metro site for free, it’s not as bad as it sounds. Metro is sharing some of  that revenue with content creators.  If you upload a video to Metro, you  get 15p every time its viewed on a mobile.  The idea is not actually new, mobile network 3 did something very similar in 2005 with its See Me TV which eventually turned into EyeVibe and is now available on both 3 and O2.  EyeVibe’s videos are cheaper to download at 10p each, but only share a meager 1p per download with the creator.  I wonder if EyeVibe uploders are switching to MEview for the higher payout?

The user generated content and  revenue sharing aspect of Metro is probably the most interesting thing about the site, but Metro.mobi is also a pretty good general news site.  It’s  quite well designed and makes extensive use of adaptation, varying page and image sizes and markup language, to deliver an optimal experience to any phone  from ancient wml-only devices to the iPhone.  Content is strong on sports and celebrity gosip but there is  hard news as well. Metro carries about 50 full-length news articles on the site at any given time, most include photos.  Source: OK OK