Found on the Mobile Web is a weekly Wap Review feature showcasing sites added to the yeswap.com mobile portal and WapReview.com mobile directory.

Ad Week: (mobile.adweek.com) The weekly advertising trade magazine now has a mobile site. The ad industry news site is searchable. The search page is much too complicated for good mobile usability, however.

TocMag: (tocmag.com/mobile) Free downloadable user created Java magazines and videos. The site is famous (or infamous) for the How to Roll a Joint video it briefly hosted. The magazines are entertainment themed and the ones I tried were free from controversy and quite nicely done. Unfortunately, the wml download pages have un-escaped ampersands in URLs which will prevent them from working on some phones. See Validation is Your Friend for some tips on how to avoid this on your mobile site.

Sundance Film Festival Global Short Films: (www.e-clips.mobi) Five short films presented by Sundance and the GSM Association. Each video is available as either a stream or a download. The videos seem to be protected by some sort of DRM. I couldn’t find any way to download them to my PC for side loading but recent phones handle them with no problems. Each file is between 2.5 and 3 MB. 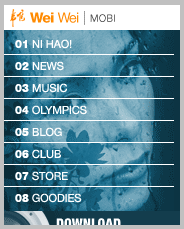 Billboard: (mobile.billboard.com) Music industry weekly that tracks record and song popularity in dozens of “charts”, the best known of which is the Billboard Hot 100. All the charts are available on this new mobile site along with album cover art and chart history by artist.

Wei Wei: (weiwei.mobi) The “Chinese Queen of Pop” and Olympic Ambassador has a mobile site. The attractive, graphics rich pages feature photos, videos, Wei Wei’s blog and downloadable tracks and ring tones (some free, some not).

Visalia Times Delta: (m.visaliatimesdelta.com) Sister paper of the Tulare Advance Register has similar layout but with content specific to the nearby Central Valley city of Visalia.

Zero Rubbish: ( www.zerorubbish.com) A portal site with over 300 links, many new to me, well organized with descriptions and rankings. Registered users can use Zero Rubbish to store their bookmarks.

2007 Tour of California: (mobile.amgentourofcalifornia.com) The 700 mile stage race from SanFrancisco to Long Beach kicks off this Sunday (18-Feb-2007). Among the world class riders in this years event are Levi Leipheimer, Ivan Basso, Dave Zabriskie, Cadel Evans, Michael Rogers, George Hincape, and world champion Paolo Bettini . For the first time the Tour will have it’s own dedicated mobile web site offering live coverage of every stage. Coverage commentary will be provided by VeloNews.com who also have their own mobile web site at www.velonews.com/live_mobile. CyclingNews.com is also be offering live coverage of the Tour this year at live.cyclingnews.com/wap (wml).