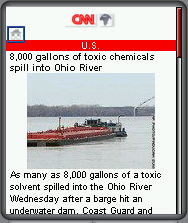 I’ve criticized CNN in the past for their policy of blocking users whose carrier is not a CNN “partner” or if they are using Opera Mini. It looks like that may be changing. CNN together with Ericsson have launched cnnmobile.com, a slick new mobile news site targeted at users in the NEMA (Europe, Middle East, Africa and Latin America) markets but seemingly accessible from any IP address.

Like the still restricted by IP address CNN US mobile site at mobile.cnn.com, cnnmobile.com has much more than just news. There are 5-day weather forecasts for over 1000 cities around the world, plus sports, entertainment, technology and business news. Also exciting is the inclusion of hourly two minute video news reports. The non-streaming 3gp videos run around 600 KB and should play on most recent phones.

The site design is good with lots of access keys and 44px wide thumbnail images that expand to full screen width when clicked. There’s even a text-only wml version of the site for users with old or entry level phones that can’t display xhtml

I really like the new CNN International site and not only because I can browse it with my preferred browser instead of my phone’s slow and clumsy built-in browser. The coverage seems more balanced and less sensationalist than the US version. For example, one of the lead stories in the US edition is headlined “‘State of panic’ after car bombing” while the international edition’s version of the same story carries the less subjective, more 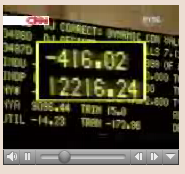 CNN is also encouraging users to submit videos and pictures of breaking news from their mobile device by MMS or email to [email protected] This user generated content will be featured in a special i-Report area on the mobile site.

Sports is one area where US users might find the international edition slightly inadequate. While boxing and tennis seem to get equal coverage in both the NEMA and US markets, basketball does not. On the eve of March Madness (US college basketball championships) there is nary a hoops story in CNN International. But that’s what ESPN is for.