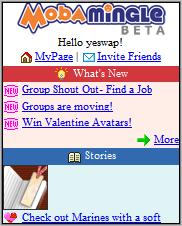 MobaMingle (m.mbmgl.com) is the English version of Mobile Game Town, Japan’s biggest (10 million members) mobile-only social network. It seems to be a pretty literal translation of the Japanese original, both in look and feel and in most of the features. Mobamingle has the usual trappings of other mobile social networks, messaging, groups, blogs, friends and a “wall” but adds only-in-Japan features like anime style avatars and user created mobile novels. One thing missing is the signature element of Mobile Game Town, Games. The Japanese site is centered about Flash games, which makes sense as most Japanese mobiles support Flash. In the West, Flash is pretty much limited to midrange and up Nokia and SonyEricsson phones. I guess that DeNa, the company behind Mobamingle, decided to forgo the games as being a divisive element as only a subset of members could play them

Avatars are a big part of MobaMingle. When you first join, your avatar is a faceless, hairless figure in underwear. So the first step is outfit your avatar. It’s a liitle like second life. You buy a face, hair and top and bottom garments. Purchasing is with MobaGold. MobaMingle’s virtual curency and new members start out with 500 “G”s of it. Which just happens to be enough to buy a face, basic hair style, a top and a bottom.  That’s my 420G avatar in the image below. Of course to really look cool on MobaMingle you need fancy threads, accessories like jewelry, shades, sporting equipment, pet, a background  and animated features like blinking eyelids. All of which require more MobaGold – which you have to earn. You get 2Gs every time you post on your blog or in a group forum and between 5 and 40G daily IF you log in every day. But to really accumulate MobaGold you need to invite friends. Every friend who accepts your invitation nets you 300G. Unlike in the Japanese version, it’s not currently possible to purchase MobaGold with real money.

MobaMingle is the ultimate pure mobile site. There is no PC version. You have to register for MobaMingle on your phone and all the social networking happens on the mobile web site. There is a MobaMingle PC website but it is strictly promotional, the only interactive feature is the ability to upload completed mobile novels.

Registering for Mobamingle requires giving a valid mobile number in order to receive a verification SMS. I’m always wary of sites that ask for mobile numbers because of the possibility of premium SMS scams. I’m sure Dena is reputable and would never misuse my mobile number but offering email verification as an alternative would inspire more confidence.

Will a Japanese style mobile-only social network catch on internationally?  Hard to say, Japan is the most advanced country in the world in mobile services and applications, but few of the uniquely Japanese elements of Keitai culture have been successful outside of their homeland. iMode failed in the West, QR codes are struggling and location based mobile web services have been effectively blocked by operators. MobaMingle might be different. Here on the US West coast at least, there is a lot of buzz around Japanese youth culture especially manga, jPop, and anime. One problem a youth oriented mobile web based service like MobaMingle faces in the US is that most teenagers don’t have data plans. That maybe changing, Sprint just launched a $50/month prepaid unlimited voice, text and data plan under the youth oriented Boost mobile brand.

Be sure to also read mjelly‘s James Cooper’s review of MobaMingle at Mobile Industry Review with lots more screen shots.