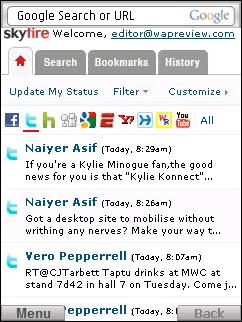 Skyfire released a new Beta of their free mobile browser for Windows Mobile and S60, Version 0.9. This is a big upgrade, the release notes are huge. Here are some of the highlights. 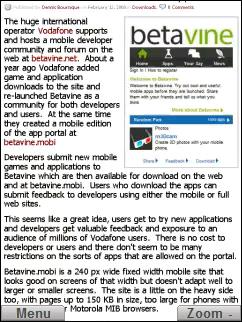 I’ve upgraded my N95-3 to the new release. The full version number is  0.9.9156. The upgrade went very smoothly. I just went to http://get.skyfire.com/ using Skyfire 0.85, downloaded the file and installed using the S60 File Manager.  As promised, there were no PIPS error messages.

I’ve been using Skyfire for a few hours and see a lot of improvements but there are also a couple of steps backwards. The change to text rendering is particularly problematic.  It basically works as documented, when you zoom in, the page’s original formatting is retained, with floated images displayed very nicely within the text.  Columns are fit to screen width so that horizontal scrolling is not needed.  The only problem is that the text is too small to read on many pages (see middle image).  It’s especially bad on blogs like this one which use 500 px or wider columns.  You can enlarge the text by pressing the “3” key” but when you do so columns no longer fit the viewport and you have to scroll horizontally to read each line.  I think Skyfire has the right idea here, they just need to tweak the algorithm to maintain a readable font size at all times.

I haven’t tried the Facebook feed yet but having Twitter on the home page is nice feature and works as advertised.  However, Tweets in the timeline are truncated at 75 characters (top image).  You can click through to read the longer ones but that breaks the flow of scrolling through a “river” of complete thoughts in 140 characters or less. 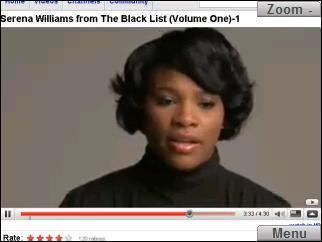 I’m also seeing a stability issue with 0.9 on my N95-3.  After five minutes of inactivity Skyfire drops the connection and returns to the home screen to save battery power.  This is normal and with 0.85 as soon as you press any key Skyfire wakes back up.  With 0.9, when I wake Skyfire up it often immediately crashes.  I can restart it and start-up time seems much faster than previous versions so it’s not as bad as it sounds but really needs to be fixed.

It’s not all bad however, Skyfire generally seems snappier in this release, pages load a little quicker and menus pop up instantly.  The access point management is much improved. I was prompted for my access point on initial start-up but not on subsequent restarts.  Rendering is better too, with no more overlapping text in Yahoo Mail and Gmail, although reading emails on both sites still requires horizontal scrolling.  Flash video playback, Skyfire’s forte, seems better than ever with no discernible lag on a couple of videos I tried.  It’s also easier to zoom into full-screen video with the view-port centered on the video player.  All in all, 0.9  should be a worthwhile upgrade for most users, although you might want to wait a couple of days before downloading it to see if there is a bug fix release for the S60 stability and and text size issues.