Real time transit information is something that is a natural for the mobile web. It’s huge in Japan where it’s often combined with QR Codes for almost instant access. Check out the graphic below from Forrester Research via ZD Net’s Russell Shaw to see how it works. 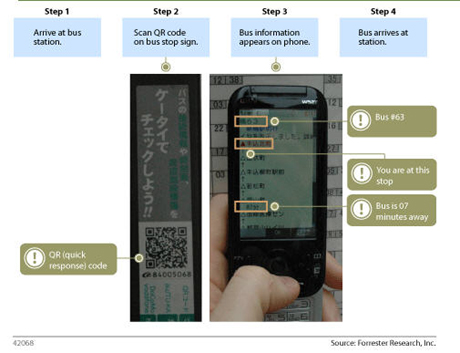 Here in the West, using 2D codes for this purpose is in it’s infancy. There’s a pilot project in Paris but widespread adoption seems years away. The big thing holding back the use 2D codes on mobile phones is the number of competing incompatible code formats. There are a couple of open, royalty free formats; QR Code and Data Matrix, plus a bunch of proprietary ones like Shotcode, ezCode, Colorcode, BeeTag, Smartpox and Qode. Users won’t install a half a dozen different readers on their phones. And until a single format has a dominant market share, phone manufacturers won’t make a reader application a standard feature on all phones and transit operators won’t invest in the systems and signage needed to make it work.

On my recent trip to Barcelona, I saw a relatively low-tech system for delivering real time transit information to mobiles that’s nearly as easy as OR codes and works today with any phone that supports either mobile web or SMS.

Every bus stop in Barcelona has a unique 4 digit number which appears on bus stop signs. The signs also list the line numbers of the buses that stop there. Most of the line numbers have a little mobile phone icon after them indicating that you can get real time arrival information at wap.tmp.net.

To use the service, called iBus, you just enter the 4 digit stop number and the one to three digit line number into a couple of text 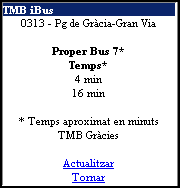 easier to use because it sets your browser’s input mode to numeric, saving at least a couple key taps.

TMB (which stands for Transports Metropolitans de Barcelona) is the agency that operates all of Barcelona’s transit buses and the Metro. iBus is only one part of TMB’s mobile site which also has information on passes and fares, a description of each line with hours of operation and schedule frequency and an interactive door to door trip planner. All these features are available in Catalan, Spanish and English except for iBus which is Catalan only. But iBus is so easy to use that all the Catalan you need to know is that “No. Parada” = stop number and “No. Línia” = line number.

iBus uses GPS technology to track where the next bus is and estimate arrival. It should be accurate but it let me down the two times I tried using it. In both cases it claimed that the next bus would arrive in 20 minutes. The first time I decided I didn’t want to wait 20 minutes and started walking only to have the bus pass me less than 5 minutes later! The next time I waited and again the bus arrived within a few minutes. I’m not sure why this happens – perhaps the buses that arrived had broken GPS units and couldn’t be tracked. I frequently use the NextBus system in San Francisco (see my review of Nextbus and three other transit trackers ) in San Francisco and find it infallibly accurate. But NextBus’ user interface, although recently improved, is still much more cumbersome and time-consuming to use than iBus’s simple numeric interface.

In spite of my problems with the information provided by iBus, I think the design of the iBus mobile site is absolutely perfect. It contains no images or irrelevant text so it loads instantly and the all numeric interface is the best possible solution for manual input of location. All such sites should do it this way and several others (Seattle’s My Bus and Transit Tracker in Portland, Oregon (both covered in last year’s review) do.

3 thoughts on “Almost as Good as QR Codes”