Chicago’s Regional Transit Authority (RTA) has a mobile site (www.rtamobile.com) with a trip planner and schedules for all the agencies that operate rail and bus transit in the greater Chicago area. I’ve been to Chicago several times and have been impressed with the city’s public transit system – fast frequent rail service goes almost everywhere and where rail doesn’t go there is good bus service. I had high expectations for RTA’s trip planner. I have to say I was disappointed.

Actually RTAmobile isn’t too bad – if it works on your phone. The problem is that the site relies heavily on JavaScript which probably less than 10% of current phones support. Granted RTA bills it as a “PDA accessible” site rather than a mobile one. The PDA is dead but the modern equivalent is the smartphone and smartphone browsers generally can do Javascript. But smartphones represent less than 10% of the web enabled mobile market. 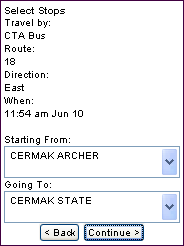 There’s nothing about RTAmobile which requires a touchscreen or high-resolution. In fact most of the screens are very sparse and would barely fill a budget phone’s 128x128px screen. Plenty of other transit agencies have created mobile transit sites that work with almost any browser. London’s is probably the best with Portand, Denver, Seattle and Washington (wml) also being good examples. It’s not like RTA’s doing anything fancy that requires JavaScript either. The site mainly uses JavaScript to create links that populate and then post a hidden form when clicked. The end result looks and acts just like a link – why not use a link!

There’s another issue that makes the site unusable even on some mobile browsers that support JavaScript. The site specifies a font-size of 1 px! I guess they wanted really, really small text. Most mobile browsers ignore this but NetFront, Firefox and IE 6 give RTA exactly what it asked for – each character represented by a single dot! NetFront is a mobile browser with JavaScript support but RTA’s site is unusable in it because all the text is unreadable. I don’t have phones with IE Mobile, Palm’s Blazer (based on NetFront) or the Nokia WebKit browser so I don’t know if they will work or not. If you have one of these browsers please leave a comment to let us know if RTAmobile works on you phone.