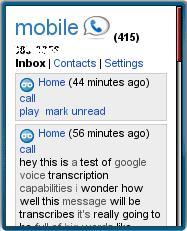 I upgraded  my GrandCentral account to Google Voice yesterday.  GrandCentral was the  “one number for life” startup that Google bought two years ago.  After the acquisition, Google seemingly neglected GrandCentral to the point that I expected it would soon follow Jaiku, Google Notes and Dodgeball into the graveyard of deceased Google experiments.

I was wrong. Google seems to have spent those two years redesigning and upgrading GrandCentral to re-release it as Google Voice.  The new service retains all the features of Grand Central;

I’ve been playing with Google Voice for about half a day now and it generally works very well. Texts are delivered immediately and can be viewed as a threaded transcript on the Google Voice web and mobile web sites. Texts sent from the web interfaces appear as coming from your Google Talk numbe Recipients can reply to Google Talk texts and their replies go to all your phones.  When someone sends you a text it comes from a 406-NNN-NNN (Montana) number.  If you reply to that number it will come from your Google Voice number and will show up in your Google Voice inbox.  The sender’s real number also appears in the body of the message for reference.

I had mixed results with the voice transcription. It handled common words very well but sometimes stumbles humorously on longer words and proper names. Gustav was transcriped as ” the start of” and Yoplait became “at your place”. My favorite was “supercalifragilisticexpialidocious” which was rendered phonetically as “super caliper she’s X P L a delicious”. I was generally able to make sense of the transcriptions and the mp3 clip of the actual message was just a click away for the ones I couldn’t.

The Google Voice  mobile site is quite similar to the GrandCentral one with three tabs for Inbox, Contacts and Settings.  Inbox now includes SMS and the Settings tab has some new options; “Do Not Disturb”,  “Add Credit” and the ability to toggling call screening, which Google calls  “Call Presentation”.  It’s an easy site to navigate and use and at 4 KB in size it loads quickly and should work on most phones.

When you log into GrandCentral you should soon see an “Upgrade” link if it’s not already there.  Upgrading is optional.  If you’re a Grand Central user  in the US I recommend upgrading to take advantage of the new features. Canadian GrandCentral users and any other non-US residents who managed to get a  Grand Central number should probably wait as Google Voice is only available in the U.S., at least for now.

GrandCentral did accept users in Canada.   Google has said that Google Voice will be available in Canada and other countries “in the next few weeks.”  At least one Canadian user who was able to upgrade to Google Voice says it works except that He can no longer add new Canadian numbers to his phone list and that calls to Canadian numbers, which used to be free, now cost $.01/minute.