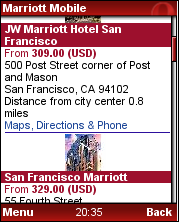 When I last covered Mariott’s mobile site in September, 2005 I gave it a rather bad review. The redesigned site is much more usable. The biggest problems with the old site were the excessive scrolling and huge number of clicks required to do a simple search and also that results were not listed by distance from the airport or city center entered. The redesigned site has much better navigation and the default sort is by distance with an option to sort by price. The site features pictures of the hotels, zoomable and scrollable area maps, driving directions and estimated cab fare from the nearest major airport.

The site isn’t useful for finding a room for the night, however. It  doesn’t check availability, it’s just a catalog of Marriott Hotels. To book a room you have to call Marriott and the phone number is not even a click to call link.

The biggest problem with the site is that the hotel search form is too large to load in the embedded browsers of feature phones like my Motorola i850 – which uses the relatively recent Openwave V7 browser. The Motorola ADK and Openwave V7 browser emulators also fail to load the page due to its size. The page has 14 KB of markup which is at least 4 KB too big. Marriott Mobile works well with Opera Mini and it should be OK on Smartphone browsers too – but users of many popular phones like the RAZR V3 will not be able to use this site.