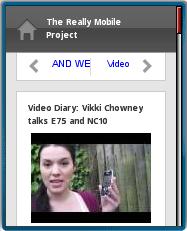 My favorite mobile blog for the last few years was SMS Text News (later renamed Mobile Industry Review, MIR for short) I thoroughly enjoyed Ewan MacLeod‘s brutally honest, scathing but hilarious put downs of  “rubbish, bullocks and fluking useless” mobile devices and services.  It got even better when Ewan added James Whatley, Ben Smith and  Dan Lane to the team and put them to work doing weekly long format video podcasts that were both entertaining and full of insights and honest evaluations of  latest mobile products and trends.

I was disappointed when Ewan announced a month ago that he had accepted a funding offer that required making MIR into a pricey subscription-only service and that the public site would no longer be updated.  I though that was the end of it but it turns out that yesterday all four of MIR’s principal players launched new web ventures.  MacLeod. Whatley, Smith and Lane together with new face Vikki Chowney hit the ground running with  The Really Mobile Project which went live with 13 posts including six videos.   Ewan’s new site is  Mobile Developer TV where he will be featuring weekly video interviews with… mobile developers.

Both sites are up and running.  As any site covering the mobile space should, both autodetect mobile browsers and deliver an adapted but fully functional and content-complete mobile edition.  I’m particularly impressed by the way The Really Mobile Project handles video on the mobile side.  instead of embedded Flash, mobiles get an image link to a copy of the video on YouTube.  It works beautifully and makes Google do all the hard work of device detection and transcoding to a video format that the handset can handle. 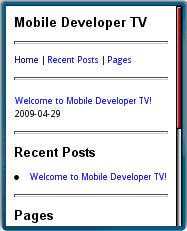 Mobile Developer TV is still in an embryonic state with  a stock WordPress Theme,  generic mobile plugin and inaugural post – no videos yet but given Ewan’s track record I expect great things from this site. Incidentally, Ewan’s is also blogging at EWAN.NET as funny, irreverent and as insightful as ever – though there doesn’t seem to be a mobile version of that site.

I’ve added The Really Mobile Project and Mobile Developer TV to the Technology/Mobile/News and Reviews page of the Wap Review Directory and YesWap.com mobile portal.