Found on the Mobile Web is an occasional Wap Review feature listing newly added and updated sites on the yeswap.com mobile portal and WapReview mobile site directory. With these latest additions and directory and portal now list 922 mobile sites. 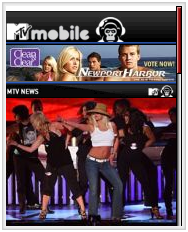 MTV: (wap.mtv.com) Music TV has a mobile site. Content consists of entertainment news, photos and entertainer interviews – and a Brittney Spears video. But the video is served in an embedded Flash player. It’s not Flash Lite, this is the same video and player that MTV uses on it’s PC web site. I’m pretty sure that there is no phone that can play that video.

Esquire:(m.esquire.com) The venerable men’s magazine has a mobile web edition with eight undated short pieces like jokes, drink recipes and mini reviews of bars on the front page. None of the items are more than 300 words long. I’d like to see the mobile site include some of the longer articles from the magazine and PC web site. This is mobile site that is way too adapted for mobile for my taste. There’s also a search box which lets you find more short articles. The archives only seem to go back 8 months. Esquire mobile also offers some Vargas pinup wallpapers for download at $2 each.

Seventeen: (m.seventeen.com) Seventeen is a magazine of health, beauty and relationship tips for young women. Like Esquire, Seventeen’s mobile site has minuscule articles that must seem oh so superficial to your average know it all teen. Esquire and Seventeen are both Hearst publications so the similarities are no accident.

Marie Claire: (m.marieclaire.com) Another Hearst mobile magazine, Marie Claire is an international women’s magazine. The mobile edition suffers from the same minimalistic “made for mobile” content as it’s stablemates. 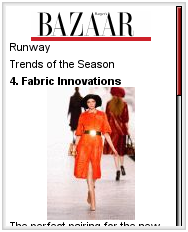 Harper’s Bazaar: (m.bazaar.com), another Hearst magazine this one focused on high end women’s fashion. Harper’s mobile edition, while it doesn’t have any of the long articles of the print and web editions, at least some quality fashion photography. The photographers aren’t credited but Harper’s has a tradition of using only the best.

Style: (style.enpocket.com) Speaking of fashion, Style magazine launched their mobile edition last week. Style mobile hardly bothers with text at all, the site is almost entirely composed of photographs of the latest fashions.

KRIS-TV: (www-2.kristv.com/mobile) Nice mobile news site for Corpus Christi, Texas from TV channel 6. The site’s mostly text only but has lots of content; local news, sports, traffic and a very extensive weather section with several maps and a choice of 6 radar images.

PalmFreeware.mobi: (palmfreeware.mobi) sister site to PocketPCFreeware.mobi. Over 9000 Palm OS freeware downloads. These are nicely done sites with user reviews and comments and screenshots of each application. I hope they plan to do a SymbianFreeware.mobi.

SmartphoneFreeware.mobi: (smartphonefreeware.mobi) From the creators of PocketPCFreeware.mobi, this new site specializes in free software for the non-touch screen “Standard” version of Windows Mobile formerly called Windows Smartphone. Currently SmartphoneFreeware only has about 500 files for download compared with 6000 for on the Pocket PC site and 9000 on Palm freeware site.

Measurements.mobi: (measurements.mobi) A simple but useful site with tables for conversion between Imperial and Metric. There are also Cooking Equivalents charts and a Celsius to/from Fahrenheit temperature converter.

Phreep: (wap.phreep.com) Ad supported mobile Java games. Curiously, only .jar files are supplied which will work with Nokias but not Motorolas which need both .jar and.jad.

Memoware: (memoware.com/wireless) Mobile edition of a major site for free and commercial eBooks. The mobile site only has the free books, surprisingly. There are over 2000 Books in a variety of formats for PDAs and smartphones like AportisDOC PalmReader, Plucker, iSilo, MobiPocket, Windows Reader and PDF.

Pocket Deal: (pocketdeal.com/mobile) Browse and search for deals and coupons at online merchants.