First impressions of Opera’s latest Mini Beta are mostly positive for me. The new release contains two major new features, landscape mode and multiple, customizable search. There are some nice usability enhancements plus hundreds of bug fixes including a promised permanent fix to Beta 1’s biggest bugs, disappearing cookies and the broken web forms that plagued Beta One on some sites. 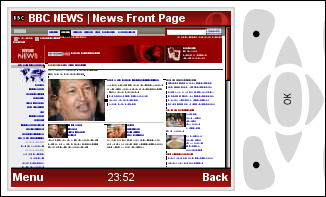 Landscape mode is the marquee feature for Beta Two. It’s pretty neat, pressing * then # instantly rotates the screen 90 degrees counterclockwise so you can hold the phone in your right hand with the screen on the left. The soft key labels re-align and the d-pad keys remap so that you still press left and right to page up and down.

I don’t find myself using landscape mode all that much, though. It’s harder to hold my flip phone in that orientation and with a 176×220 screen it doesn’t buy that much more in width anyway. With a bigger screen or a different phone form factor I can see this being useful and it does demo well.

The other major feature is multi-search which I’m using a lot. Pressing # then 9 brings up

a list of search engines. Initially the list has Yahoo, eBay, Wikipedia, Flickr and iMDB. You can add almost any other search very easily. Whenever you are in the text entry field of any search form pressing the right soft key adds the search to the multi-search page. I quickly added Google, Jumptap and Wap Review to my multi-search. You can reorder the list of multi-search engines or delete any of them with one exception. Yahoo! Search can’t be moved or deleted, it is always the first in the list. Understandable as the Yahoo search deal is a major revenue source for Opera.

There are many minor enhancements. Rendering of complex pages is better and you can set full screen mode as the default. Most of the features in the stable Version 3 of Mini that were missing in Beta One are back too. You can go to HTTPS secure sites with the new beta, content folding is back as is the nice anti-aliased small font – although it’s a little too small for my old eyes on the 1.9″ screen of the i850. About the only features in V 3.1 that are still missing in the Beta are the RSS feed reader and Photo Blogging. There will be at least one more beta before the final release and both those features should be in that beta along with italic font support – something Mini has never had and I really miss.

The first beta had stability problems on many phone models although not on my Motorola i850. In fact, I don’t think I had a single crash in 2 1/2 months of constant daily use. That has not changed for me with Beta 2 but others on The Opera Mini forums, particularly Windows Mobile and Blackberry users, are reporting that this beta is much more stable. Scrolling speed, which was much improved in Beta One compared with previous versions, seems as good as ever.

As for bug fixes, I’m really hoping that the cookie issue that plagued the first beta is fixed. It was really hard to use Bloglines when it was prompting for your ID and password every time you loaded a new page. The form submission bug broke the del.icio.us bookmarklet which I use constantly. These sorts of things are to be expected in a beta and they were intermittent. In fact, Beta One has been pretty good with cookies and forms for the past week. I haven’t lost a cookie or had a form submission fail in the first 36 hours of Beta Two so hopefully it will last.

I opened by saying that my impressions of this beta were mostly positive so here are the negatives. On my phone, left and right single and double quotation marks appear as little boxes instead of quotation marks. I reported this shortly after Beta One was released. It’s strictly a cosmetic issue but it is really ugly.

The other issue I’m seeing is that the page cache in this beta seems to be much smaller than in previous releases. The cache in Beta Two only seems to be able to hold about 30 KB of pages on my i850. Beta one and version 3.1 can have a couple hundred KB’s worth of pages sitting in the cache. I really notice this in Beta Two. When I hit the back button , instead of the nearly instant retrieval of the cached page that used to be one of the best things about Opera Mini, I often see “connecting…, processing…, loading…“. I’m hoping that the cache thing is just a bad install on my phone. I’m going to try uninstalling and reinstalling the beta to see if it helps. I’ll update this page tomorrow as to whether reinstalling helped.  Update: The cache issue real. See here for details. 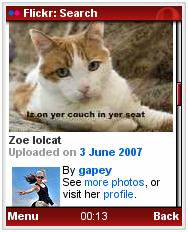 Remember that this is a beta and there will be bugs. If you see something that’s broken, by all means file a bug report, that’s the best way to insure that your bug will get fixed.

If you aren’t comfortable with beta software don’t use it. Opera Mini V 3.1 is very stable and is still the best mobile browser in the world. It’s amazing how it turns my rather low end Boost Mobile prepaid phone into a device that can browse just about any page on the full or mobile web with fast page loads and gorgeous full screen image rendering. Boost plus Opera Mini buys you awesome unlimited mobile web browsing for a mere $10.50 per month all inclusive. Opera can dramatically improve your browsing experience on almost any Java capable phone. The beta and V 3.1 coexist nicely so you can alternate between beta testing and totally stable browsing.

If you’re using an iDEN (Boost, Nextel, Tellus Mike, etc) phone, I’ve put a copy of the Beta Two .jad and .jar modified for easy loading with iDenJAL on the Wap Review download page which also has links to iDenJAL and instructions. Motorola and the carriers have made it much harder than it should be to get 3rd party applications on these phones, but in the case of Opera Mini it’s well worth the hassle.