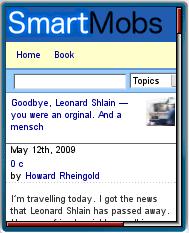 Smart Mobs is an active and popular Web site covering  technology, especially mobile and the Internet, and its relation to society, culture and politics.  The emphasis is on using tech for social good and political action.  The site has a big following among web and mobile people.

Smart Mobs‘ editor and a major contributor is Howard Rheingold, an author and researcher who  has been studying technology and its effects on thought and human  interaction since the 1980’s. Among his many accomplishments, he  is credited with coining the term “Virtual Community”. Rheingold is best know for his ground breaking 2002 book, also titled “Smart Mobs“.  The book explores how mobile technology, particularly text messaging, has enabled communication and cooperation among groups of disconnected people for social interaction and political action with profound effects on culture, politics and society.

The new Smart Mobs mobile site was built using Mobify and includes the full editorial connect of the desktop site.