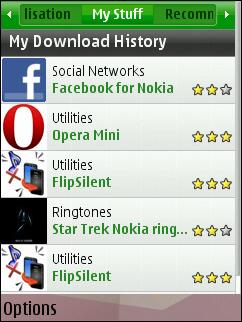 It’s been three weeks since Nokia’s Ovi App Store launched.  I figured that it was time to go back and take a look at how the store was evolving.  By now the opening day rush would be over and the traffic related availability problems that some users reported resolved.  I also wanted to see if the store’s rather bare selves were filling up.

But first I made a determined attempt to get the Ovi Store App to install on my North American model N95-3.  Although the store app is supposedly available for S60 FP1 devices like the N95-3 I had a bit of trouble finding a way to download and install it.  The Nokia Download App on supported phones should show the Ovi Store as an available download.  When I launched and updated Download, an Ovi Store icon did appear.  But clicking it just launched the mobile web version of the store in the browser.  The mobile web site didn’t seem to offer the app either, even when I searched for “Ovi Store” or “Ovi App”. There’s nothing wrong with the web based store, in fact it worked perfectly on Ovi launch day when I experienced hangs with the desktop web version of the store.  But I really wanted to try the app which I hoped would provide a nicer user experience. It’s also supposed to alert you when there is an update available for one of your installed apps, one of my favorite features of the Android Market.

I suspected that I wasn’t seeing the Ovi app in Download because it wasn’t compatible with my phone’s old  firmware.  I’m running 20.2.011 from May, 2008 which is the latest Nokia has deigned to release for the N95 NAM.

Today when I was testing some things on wapreview.mobi with the N95 an Admob ad popped up offering me the Ovi download.

I didn’t want AdMob to accuse me of click fraud for clicking on my own ads so I started looking for the ad on one mobile site after another.  Finally after trying about 50 sites I hit pay dirt at MobilityBeat.  Clicking the ad downloaded and installed Ovi Store version 1.05(212). After a typical S60 install cycle with multiple prompts was told to “reboot” my phone. I power cycled and launched the Ovi store app which immediately prompted me to download an upgrade to the app. Another 3 MB download, more prompts, another reboot and I was finally in business with version 1.05(231) of the Ovi Store.  Nokia,  it would be a really good to keep the files that your paid advertising points to up to date to avoid annoying your customers.

The app basically works but there are enough quirks to make me wonder if it really is compatible with my phone. It features a horizontally scrolling tabbed interface with each tab representing a different category; Applications, Games, Audio & Video, Personalization, My Stuff and Recommended. The first glitch was that all the categories except My Stuff, which shows the apps I had downloaded previously , were empty except for the the text “No content was found.”  Any one else seeing this?

At least the Search function works. A search for “utilities’ returned several screens full of results. Searching for “Facebook” surfaced “Facebook for Nokia” which the description says is for S60 touch devices which the N95 definitely isn’t. Whoa, I though the Ovi Store was only supposed to show content compatible with your phone. I tried downloading the Facebook app anyway as an experiment. Surprising the app did download, install and run up to the point of displaying a welcome screen with a single option, “Exit”, which predictably exited the app. I was also able to download and install another app titled “Mo-Call for S40 (120×128/160)” which is an interface to a low cost international calling service. In spite of the name, Mo-Call does seem to work on the N95 with no evidence that it was designed for a much lower resolution screen. 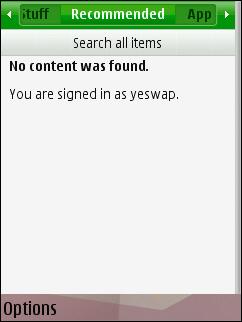 The most positive thing I noticed about the Ovi Store app is that when you install something with it you do not see the normal annoying S60 prompts and warnings; “Do you want to install…”, “phone memory or storage card?”, “Continue?”, “Choose Your Language”, “Allow Application access to:” Ovi apparently knows your language and when you  install the Store app you specify the location for all installed apps. This is a great improvement as the prompts are essentially useless time wasters and confuse many users.  Once the browse by category function is fixed I will prefer the app over the mobile web Ovi Store. But for now I will be uninstalling it as it breaks the browser based Store. When you try to visit store.ovi.mobi, the app launches and comes to the foreground.  You can dismiss the app and go back to the Store in the browser but clicking any link launches the app again which soon becomes frustrating in the extreme. Having browser links launch apps without so much as warning or asking if  it’s O.K. is incredibly intrusive and a really bad idea.

So how about the Ovi Store Catalog, is it filling up? On launch day, May 26, Ovi listed 913 paid and 83 free apps for the N95. Today the count is up to 1217 paid and 95 free. A modest improvement and there are some good additions including; Opera Mini, EQO, Photobucket, Truephone, Flixwagon, Joikuspot, and Qik. But most of my favorite apps are stll missing; Gmail, Google Maps, UCWEB, Y-Browser and Y-Tasks, Screenshot, Devicescape, SICI FTP,  anAze (free voice turn by turn routing) and even MobiReader. The thin catalog is the biggest difference between Ovi and the iPhone and Android app stores. The competition’s stores include virtually every app available for their respective platforms, Nokia’s has maybe 1% of what will run an an N95. I realize it takes time for developers to go through the submission process and for Nokia to test and approve submitted apps.  It doesn’t help that, in spite of the recent clarification that Java apps don’t need to be signed,  the signing and certification barriers are significantly higher for Ovi than the IPhone  App Store and Android Market.  I do not think the Ovi store will really take off until users are confident that the vast majority of applications compatible with their phones are in it. For now I’ll stick to Google Search as the best way to find applications and games for my Nokia phones.

I like a lot about the Ovi store, especially the elimination of unnecessary install prompts. The user interface looks like it will be quite nice too once it works properly. Nokia just needs  fix a few bugs  and find a whole lot more content to make the store a worthy companion to Symbian, the best smartphone platform for power users.