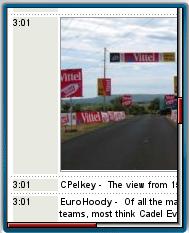 This year’s Tour de France is off to an exciting start. The biggest news is seven time winner Lance Armstrong’s coming out of a four year retirement at age 37 to ride his 12th Tour. Armstrong claims he isn’t riding to win this year but to support Alberto Contador, his Astana team’s leader. However yesterday Lance managed to join a late stage breakaway engineered by team Columbia-HTC. The 28 man breakaway finished 41 seconds ahead of the pack and Contador. Going into today’s stage Lance was sitting in third place, just ahead of his team leader. A strong performance by Astana in today’s team time trial has moved Armstong into second place less than a second behind leader Fabian Cancellara with Contador in third, 19 seconds back.

Cable TV channel Versus, which provides live Tour coverage in the US, has really screwed it up this year. The actually commentary, sourced from the U.K’s ITV, is by the legendary Phil Liggett and Paul Sherwin and is fine. The ITV broadcast has well defined commercial breaks. But that’s apparently not enough for Versus who is interrupting the ITV feed mid sentence, sometime at critical points in the coverage to interject even more ads. When coverage resumes it does so with 30 seconds or more of commentary lost!

If you can’t watch the tour on TV or want to find out what you missed due to an ill-timed Versus commercial interruption there are a number of mobile web sites offering live text coverage of the Tour. 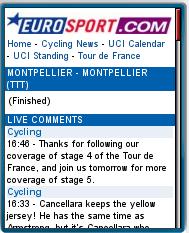 Velonews ( mobile.velonews.com ) The U.S. based print cycling newspaper has live coverage on their mobile site. In prior years Velonews’ coverage has been first rate in terms of commentary but the site had problems keeping up with the huge traffic the Tour generates. This year they are using a new platform from coveritlive.com which seems fast and robust and includes photos. The table based layout makes horizontal scrolling necessary on screens that are less than 320 px wide, though (image, top). Rating: Content

Eurosport (m.eurosport.com/cycling/) The big European sports TV network has added live mobile coverage this year. Unfortunately, the mobile version truncates the coverage, cutting off all but the last 20 minutes or so’s comments. Not good if you can only steal a glance at the Tour occasionally, like at work, and want go back and see what happened earlier. The site loads very slowly at times and the updates are rather cryptic and lack niceties like a tabular leader-board found on the other sites. Rating: Content

BBC Mobile (news.bbc.co.uk/mobile/bbc_sport/cycling/ ) The BBC provides the full text of their live coverage from the the beginning of the race to the end. The BBC commentary was a bit sparse in prior years but this year I think it’s the best of the bunch with frequent factual reports that seem to catch the critical moves. This is light weight version that should work on all phones. Rating: Content 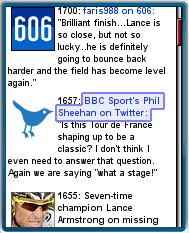 BBC PDA (news.bbc.co.uk/solpda/ukfs_sport/hi/other_sports/cycling/) This is the BBC Mobile live text stream enhanced with photos, bits pulled out of Twitter, including one today by Lance himself, and  user comments. If you are in the U.K. you can text a comment to 81111 or call 606 to leave a voice message. There is moderation with only selected comments being used, probably a good thing. The comments add a lot to the experience making this my favorite mobile site for live Tour coverage. Rating: Content

What about CyclingNews.com? The number one cycling website isn’t offering any live mobile Tour coverage this year! The old live.cyclingnews.com/wap/ link returns a 404 “Not Found” error. That’s pretty strange as CyclingNew’s live commentary is by far the most extensive on the web and is very popular with cycling fans around the world. Actually, you can easily view the desktop live coverage with Opera Mini and probably other full-web mobile browsers. To try it start at http://www.cyclingnews.com/races/96th-tour-de-france-gt/stages/, scroll down to the current stage and click the Live link. I don’t know who dropped the ball on the CyclingNews mobile site this year. It’s probably related to CyclingNews’ just completed and much needed total redesign of their desktop site. Perhaps integrating a mobile version with the new content management system is delayed and the mobile version will appear eventually. But not having it up for the biggest race of the year is really bad form.

4 thoughts on “Who Has the Best Live Mobile Tour de France Coverage?”