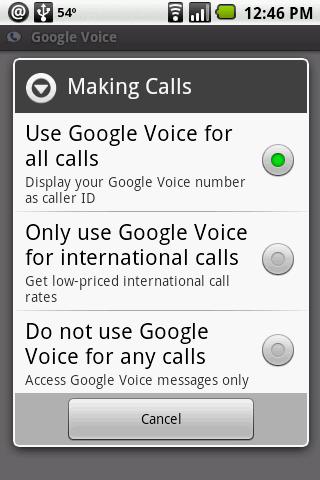 This morning Google took another step toward making mobile operators irrelevant by releasing a  Google Voice application for Android and Blackberry devices.  I’ve been using Google Voice since it launched. If you are unfamiliar with the service, Wikipedia has an excellent overview. In summary,  Google Voice gives you a new (currently U.S. only) local number.  Calls and texts to your Google Voice number are routed by Google Voice to one or more mobile, Gizmo5  VOIP or land-line numbers that you specify.  This is obviously very handy for people like me who have multiple mobile accounts,  including temporary numbers on demo phones. The only number I give out is my Google Voice number, calls and texts to it reach me regardless of which phone I’m carrying. Replying to a text sent though Google Voice works too. The reply-to address is actually a special Google Voice number that routes the message back to the person you are replying to and appears to the recipient to come from your Google Voice number. Google Voice has lots of other features too like visual voicemail and threaded SMS through the web interface, voice mail transcription, call screening and selective blocking of calls from certain numbers like those used by telemarketers.

Making calls with Google Voice is a bit more difficult than receiving them.  There are two ways to do it. You can call your Google Voice Number and go through a couple of prompts to enter the number you are calling. I find using the web or mobile web interface is a little  more convenient.  You visit the Google Voice mobile or desktop website to initiate a call to a  number in your Google Voice contacts. Google Voice calls your phone and then connects that call to the calling party. 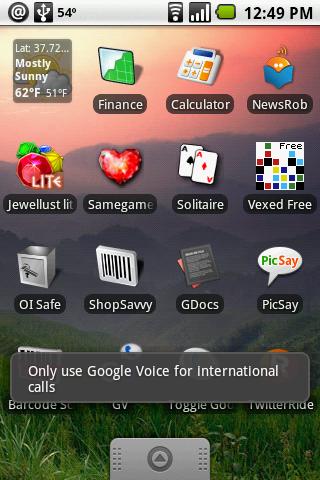 There are third party apps for Android, BlackBerry, S60 and Java phones that automate this process.  I’ve been using Evan Charlton’s GV Android app for the last couple of months and find that it works flawlessly if a little slowly.  For calls it has two modes.  One, the “Call Back” option, works as an invisible  front end to the Google Voice website, automatically entering the calling party’s number into the web form to trigger Google Voice to call you back.  The other option, “Call Out“, automates calling Google Voice’s IVR menu and entering your PIN and then the number you are calling.  Direct calling works even without a data plan or when you are roaming with data disabled. Texting with GV automates the mobile web form so  it uses data rather than your texting bundle.

I installed the official Google App on My Google Ion.  It’s very simple to use, the only setting is one that specifies which calls go through  Google Voice and which use the phone’s dialer.  The options are: route all calls or only international calls through Google Voice or to turn Google Voice off and use your own mobile number for  all calls.  This setting can be changed in the app’s settings menu (top image) or using a provided home-screen shortcut, which works like a widget to successively change to each of the three settings when tapped (second image) . To install the shortcut, do a long press on a blank area of the home screen, choose shortcuts and pick “Toggle Google Voice”

The Google Voice app on Android is fast! There is only one calling mode, a direct one which looks like it’s using a new API to talk directly to the Google Voice web service. Calls connect almost instantly, much faster than with GV. It even seems quicker than placing calls normally through T-Mobile with the phone dialer.  The Google app requires a connection  to make calls, unlike GV. The connection can be provided by WiFi or by the mobile network.  Both apps  use mobile voice minutes as well, they do not make a VOIP connection even with WiFi active. You can find both the official Google Voice app and GV in the Android Market by searching for “Google Voice”  If you want to see the description and comments on a PC use these Cryket.com links: Google Voice , GV. 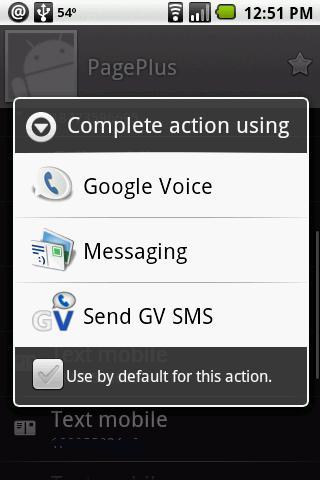 Although, slower, GV has a couple of advantages over Google’s  app. For one it works with all Google Voice accounts, the Google app only works if your Google Voice account is tied to the same gmail.com or googlemail.com account that you registered your Google device with.  Plus GV lets you call out without a data plan and lets you choose on a call by call basis whether to use Google Voice or you regular mobile number.

Both GV are completely integrated into the Android Dialer, Contacts and Messaging apps.  Sending texts you get a menu (bottom image), allowing you to select which transport you want use or to define a default for all texts.

I didn’t get a chance to try the BlackBerry app as it appears that BlackBerry OS 4.2 is required and my old 7100i is stuck on 4.1 with no upgrade available. You can download it by visiting m.google.com/voice

So how is Google Voice making operators irrelevant? First by giving you “One number for life” and directing calls to any phone it means users are free to switch calls away from the mobile operator to a land-line or Gizmo VOIP on a Symbian phone.  Secondly, international calls on Google Voice are extremely cheap, as low as $0.02 per minute killing the operators gravy train of overpriced international calls.  I expect that Google will eventually  turn Voice into a full fledged international VOIP calling service using  the Google Talk back-end and by adding support for for non-US Google Voice numbers. At that point the operator will  be only be providing the local voice loop and Google will be your phone company and international long distance provider.

One thought on “Google Voice App Released For Android and BlackBerry”