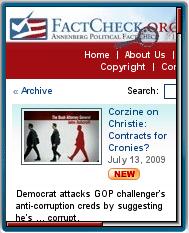 FactCheck.org is a non-partisan, non-profit project from the Annenberg Public Policy Center at the University of Pennsylvania. It researches and debunks false claims made by U.S. politicians and political action groups in campaign materials, speeches and in promoting legislation.

FactCheck has played a significant role in recent U.S.elections. In the 2008 presential campaign Factcheck.org flagged multiple falsehoods by both candidates, including Obama’s statement that McCain’s Social Security proposal would cut retiree benefits by 50% and McCain’s claim that Obama lied about his association with anti-war activist Bill Ayers.

FactCheck is available in a mobile formatted version at factcheck.org/mobile/. I like that virtually all the desktop site’s content is available in the mobile edition. However, the size of the pages (the homepage is 151 KB) means the site will not load on most non-smartphones. In spite of the increasing popularity of iPhones, BlackBerries and other devices with full web browsers, only 37.3% of U.S. mobile web page requests come from smartphones. Devices like the venerable Motorola RAZR V3 or MetroPCS’ entry-level Nokia 1006 account for significant amounts of traffic and can not handle pages much over 20 KB. Given that FactCheck.org’s content is mainly text it shouldn’t have been very hard for the site’s designers to follow the example of news sites like CNN, the BBC and even small town newspapers like the Elmira NY Star-Gazette and built a mobile site that could accommodate all browsers.