International cable and satellite television network Discovery has a mini mobile web portal at discoverymobile.com with links to separate sites for the Discovery Channel and some of the other channels it owns, The Learning Channel, Animal Planet, Discovery Health and Planet Green. The individual sites have TV schedules and other features for each channel. 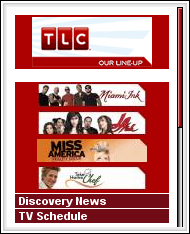 I’ve added the following Discovery sites to the WapReview directory and Yeswap portal in the Entertainment/TV folder.

Discovery Channel (discoverychannel.mlogic.mobi) The featured shows are Myth Busters, Dirty Jobs, Cash Cab and Man vs. Wild. There are star biographies, photos and synopses of future and past episodes for each program.

TLC (tlc.mlogic.mobi) which used to stand for The Learning Channel now mainly runs reality based shows like Miami Ink and LA Ink which about are tattoo artists. The mobile site includes a series of step by step photos of the application of a complex tattoo design. The site also highlights cooking show Take Out Chef and the Miss America pageant which TLC will be broadcasting this year. 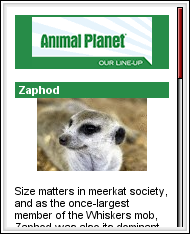 Animal Planet ( animalplanet.mlogic.mobi) The animal lover’s favorite TV network’s mobile site highlights the show Merkat Manor, a reality show about the life and death struggles of several colonies of African mammal. The site also has a directory of the US’s best dog parks.

Green Planet (planetgreen.mlogic.mobi) Discovery’s newest network, Green Planet, won’t launch until later this year but the web and mobile web sites have been up for a while spreading their environmental message with an extensive collection of articles focusing on the message that we can and must alter our lifestyles to prevent the destruction of our ecosystem.