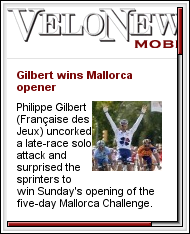 It looks like VeloNews.com, the US based weekly print newspaper of competitive cycling has launched a proper mobile site. The URL is mobile.velonews.com and it seems to have replaced the old velonews.com/live_mobile site which carried live race reports from a half dozen or so of the bigest races each year but nothing else. The new VeloNews Mobile is updated constantly and mirrors the content of the Top Stories section of Velonews.com. One thing that’s great about VeloNews Mobile is that the articles are full-length, the text of each story is the same as on VeloNews’ full web site. That’s the way I like it. There are lots of things that are different in the mobile context so it’s not surprising that some publishers think they need to truncate and summarize text articles for mobile. I think that’s wrong, I know I feel cheated when I read a cut down article on a mobile news site. Content is still king, even on mobile. Of course it’s important to use pagination to keep page weight within the limits of the device’s browser. That means less than 10KB if you are doing a one size fits all mobile site. But it’s content that draws and hold users, including mobile users. There is loads of content on Mobile VeloNews; there are twenty headlines per page, each linking to a story, and seemingly infinite pages. I clicked Next a dozen times (that’s 260 news items) and I was back in last summer’s Tour de France and I still hadn’t reached the end.

Velonews Mobile does have a few areas that still need work; like that 200px wide logo, just a smidgen too wide for the majority of today’s handsets, and the lack of a search facility, but over it’s a very nice, usable site for the cycling fan on the move.

Velonews’ timing is good. The professional cycling season is about to start and as I’m a fan it’s been kind of a tradition at WapReview to do a beginning of season post highlighting the sport and the mobile web sites that cover it.

Cycling is going through a bad period. Drugs seem endemic across all professional sports and while I don’t think cycling is the worst sport in the use of performance enhancing drugs it seems to have suffered the most in public perception and the loss of major sponsors, including T-Mobile which recently pulled out of cycling sponsorship after16 years. Even web coverage of cycling is suffering. Yahoo dropped cycling from the list of covered sports on their US mobile portal and the BBC seems to have cut back on live cycling coverage on their mobile site.

Big time cycling makes its annual visit to my neighborhood next week with the Tour of California which this year runs from Palo Alto to Pasadena, 650 miles in eight days. Torpedo Tom Boonen, just off a win in another week long race, the Tour of Qatar, will be doing the Tour of California for the first time. Boonen is an awesome sprinter and I expect him to win a couple of stages and maybe the GC. Other top contenders include Levi Leipheimer, Jens Voight, Oscar Freire, Paolo Bettini and Stuart O’Grady. Should be a great week of racing, too bad I have to go to work. At least I’ll be at the prologue in Palo Alto Sunday and following the rest of the stages on the web and the mobile web. Besides Velonews, there should be live mobile coverage on Cyclingnews.com (wml), the official Tour of California site and maybe even Eurosport. I’ll do my best to keep the mobile links on the cycling pages at Yeswap.com and the WapReview.com directories up to date. I’m always looking for more cycling mobile web sites to add so if you know of any that aren’t listed here let me know.

One thought on “Mobile VeloNews”