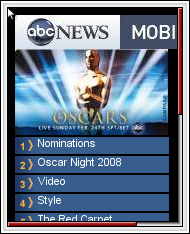 Want to follow tonight’s 80th annual Academy Awards but won’t be near a TV or PC? Here are three sites featuring Oscar content including a couple with live updates during the broadcast.
The official Oscars site at m.oscar.com looks great and has lots of media; hundreds of photos including shots of winners on last year’s Red Carpet, photos of this year’s nominees and movie posters from all the Best Picture winners since 1950. And the site has video trailers from all the nominated films. The videos are 176×144 H263 rtsp streams. They work fine on a Nokia N95 but for some reason fail to load on a Samsung A920 EVDO phone, although similar format videos from YouTube play perfectly on the Samsung. The site also has articles covering Oscar history.

It’s not clear if there will be actually be live reporting on the official site. There is an Oscars Blog in the Oscar Night 2008 section. The Blog currently has no posts, only a “Coming Soon…” message. I’m hoping this means the awards will be live blogged. You also sign up for live text alerts during the show (standard text messaging rates apply) and there’s also a text based trivial game. 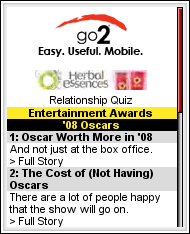 If the official site doesn’t have live updates there is an alternative. Local search site Go2.com has been diversifying into mobile content and their latest effort is called Go2 Entertainment Awards and is at oscars.go2.com. Right now the site only has a couple of short items about the Oscars plus lists of nominees for the top awards. You can vote for your favorite actor or film in each category, not that it will effect the outcome. Go2 promises live coverage on the site when the show kicks off at 5PM Pacific Time.

Finally, Mogg, a mobile video sharing site, has a nice collection of trailers from the nominated movies at mogg.mobi/taxonomy/term/27. Mogg offers the option of streaming or downloading each video, however only the downloads seem to work on the N95 and neither streams orr downloads play on the A920.

I’ve put links to all these sites on the YesWap portal. Just go to yeswap.com click Entertainment and then Oscars.