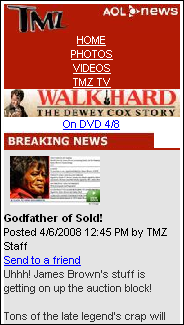 One of AOL’s few recent success, TMZ is the second most popular celebrity news and gossip blog on the web (after PerezHilton.com) according to Alexa. As reported by MocoNews, TMZ now has a mobile edition. I’m not exactlly a big celebrity follower but was I impressed by TMZ mobile.

The site features the text and images of the last 20 items 0n TMZ’s PC site in a mobile format that should work on almost any phone. Images are sized to fit the widths of various devices based on browser detection and there are streaming or downloadable videos, at least for phones that TMZ Mobile recognizes as being video capable. The video detection isn’t perfect though, TMZ didn’t make any video’s available to Motorola’s “Multimedia Powerhouse” the Z8, which is very definitely video capable. All the videos seem to be in 176x144px format even on phones like the N95 that can handle QVGA video.

Video detection issues aside, TMZ Mobile is a well designed and highly usable site. Although TMZ is owned by AOL parent Time Warner and the site carries an AOL logo, the mobile site is actually the work of Boston based Quattro Wireless. I took a look at Quattro CTO Eswar Priyadarshan’s blog and Quattro’s approach is quite interesting. If I understand it correctly they produce mobile sites from web content using a combination of transcoding, mobile web “widgets” for things like login screens and video that don’t transcode well and a rules engine that allows the mobile designer to pick, choose and rearrange bits and pieces of the transcoded content. It seems to be working for TMZ and other clients Quattro has built mobile sites for including wap.stupidVideos.com, NBA.mobi, wap.NFL.com, The Palm Beach Post and mobile.Boston.com

One thought on “TMZ Mobile”