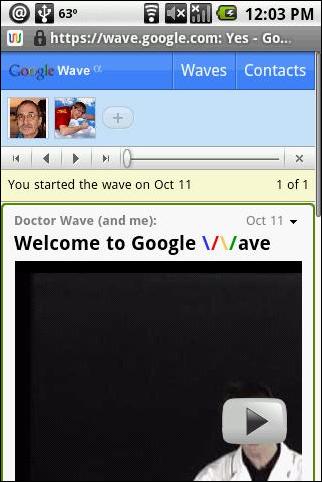 I’m on Google Wave now thanks to an invite from the Symbian Guru himself, Ricky Cadden. I haven’t really explored Wave very much yet. I’m kind of discouraged because I only have a couple of Wave contacts and Google doesn’t seem to have given me any invites to share with my friends and WapReview readers.

I did discover an undocumented mobile interface to Wave though. It only seems to work on the iPhone and Android devices.  To see it visit goooglewave.com with an Android or iPhone.  Even with those phones Google tries to scare you away with a badly formatted unsupported browser message.  Ignore the message and click the “If you want to continue at your own peril, go ahead” link.  You will land on an obviously formatted for mobile version of Wave.  The “…go ahead” link’s URL is https://wave.google.com/wave/?nouacheck but visiting that address with any mobile browser other than the iPhone’s Safari or the Android browser takes you to the desktop version of Wave, which is unlikely to work in any mobile browser.

The mobile Wave interface substitutes a simple tabbed (Waves and Contacts) page for the multi-paned affair used in desktop browsers. Unlike the desktop interface, which seems relatively stable and usable in Chrome, the mobile one looks like an early Alpha release. it’s excruciatingly slow and threw an error three out of five times I tried to open the “Welcome” Wave,  Which includes an embedded video. When I was actually able to open the Welcome Wave, the video did play on the Android phone!

It’s kind of fun to play around with Wave, especially on mobile. I’m looking forward to adding more Wave contacts and exploring it more. If you are on Wave, send me a Wave. I’m yeswap at googlewave dot com

One thought on “Google Wave Is On Android and the iPhone”