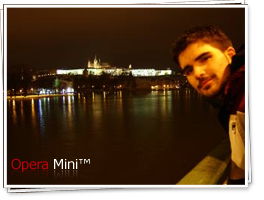 It looks like a new release of Opera Mini is imminent. The 4.1 Beta has been out for a bit over a month and Opera just announced a contest where users are asked to submit a photo and testimonial to be used in a web collage promoting a new release of Opera Mini. The prize is “an Opera goodie-bag and instant Internet fame” The deadline for submissions is only a few days away, Monday, May 12th. Details here.

Hum, I wonder if we can guess the release date for the new Mini based on that deadline. I’d think it would take at least a couple of days to pick the winners and create the collage, artistic types don’t like to be rushed, so my guess is a new release on May 15th. What’s yours?

A more important question, is what’s going to be in the next Mini. The beta has been fast and stable on all my phones so there doesn’t seem to need to be a lot of bug fixing needed. I’m hoping for some enhancements. Some of the most requested features on the Opera Mini Forum have been:

I bet we will see at least one or two of those around May 15th.  What are you hopping for in the next Opera Mini Release?