I had a great time at yesterday’s N900 meetup in San Francisco.  It was organized by N Series US‘ Matt Bennet and TnkGrl Mobile‘s TnkGrl and sponsored by Nokia who graciously picked up the bar tab and provided a couple of N900’s to play with. Matt posted some photos of the meet up and Tnkgrl’s video coverage is on her blog. 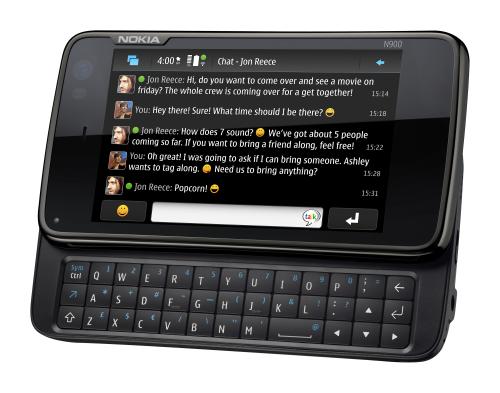 The N900 is a fantastic device that really feels more like a computer than a phone.  Mathew and Tnkgrl have each had  loaner N900s for a couple of weeks and both were very enthusiastic about the device, especially the OS and software.  One of them said it was far more stable than any S60 phone they had ever used. And this is with pre-release firmware.

Focusing on WapReview’s subject area, I spent most of my time with the N900 using the browser.  It’s the latest version of  MicroB, Nokia’s in-house Mozilla Gecko based browser for Maemo devices.  MicroB’s big claim to fame is that it includes support for the latest 9.4 version of  Adobe Flash. I had no trouble playing videos on the desktop version of YouTube in MicroB.  In fact, MicroB handled every page I tried throwing at it. Most pages loaded at a default zoom level where text was readable with no horizontal scrolling needed on the N900’s  800×480 px 3.5 inch screen.  If you do want to adjust the zoom MicroB supports double-taping to zoom in plus a unique gesture based fine zoom.  I found it easier and faster to get the desired zoom level using MicroB’s swirling gesture than with the iPhone’s pinch zoom.  To zoom on the N900 you draw a little circle on the screen, clockwise to zoom in, counter clockwise to zoom out.  The only thing holding back the usability of gestures in MicroB is the insensitivity of the resistive touch screen. Using a fingernail rather than a finger tip helps immensity but why doesn’t  Nokia’s latest flagship phone  have a capacitive screen?  Still this is a great browser. Even with the resistive screen, I believe that the N900 browser is the best I’ve ever used on a phone. Maybe I’m missing something but it seems a little too gimmicky and not very intuitive.

Three members of Mozilla’s Fennec team showed up to demonstrate the unreleased 5th Beta of Maemo on an N900.  TnkGrl caught the  demo on video. I didn’t get any hands-on with Fennec but it seemed quick and responsive, unlike previous Fennec Beta’s I’ve tried on Windows Mobile phones. Fennec features an unusual UI paradigm where you slide a finger toward different edges of the screen to bring up various menus.

Unlike MicroB, which uses a stripped down  subset of the full Mozilla stack lacking support for some Firefox add-ons  and SVG, Fennec includes virtually every core feature in desktop Firefox.  At the meet up Mozilla demonstrated Weave running on the N900. Weave is a Firefox add-on that synchronizes  bookmarks, tabs, browsing history and remembered passwords across multiple browsers both desktop and mobile.

Fennec Beta 5,  is expected to be the last Beta before the full Fennec Maemo release,  and it should be out next month.  The Fennec developers indicated that they were currently focused on Maemo but were excited about the possibility of bringing Fennec to Android next.  With Opera also developing an Android browser we could soon see a full scale browser war between Google, Mozilla and Opera happening on Android. That sort of competition would be great for Android users.  I also got the impression from talking with the Mozilla guys that not much is currently happening with Fennec for Windows Mobile or Symbian. 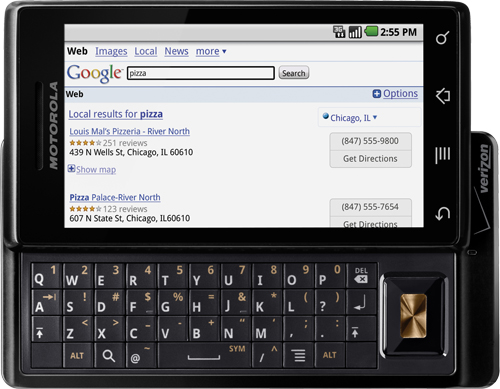 Tankgrl also brought the Motorola Droid that she had just received from Verizon.  I was impressed with the Droid’s iPhone like thinness, metal body,  gorgeous 3.7 inch,  480×854 px capacitive touch screen and  sleek industrial design.   I found the Droid’s keyboard disappointing however.  The keys are good-sized but are flat and flush with each other.  It’s almost impossible to “feel” which key you are hitting. Typing on the Droid keyboard actually felt more like typing on a touchscreen virtual keyboard than a physical one. The N900’s  keyboard has domed keys and gave the impression that I could type significantly faster and more accurately on it.

The Droid is the first Android 2.0 (Eclair) phone.  The big new Eclairfeature isn’t actually something in the OS itself but the game changing  inclusion of navigation into the version of Google Maps that ships with 2.0.  The new OS release really doesn’t look or feel much different than Android 1.6.  I guess most of the changes are behind the scenes.  I will say that the Android GUI seems much snappier on the Droid than on the G1 and MyTouch.  I wonder if that is all due to the faster processor or if performance enhancements in 2.0 play a role too.

I was eager to try the Android 2.0 browser to see if the page cache and memory management issues that have been in the browser since the first Android release were fixed.  The problem is that the browser is only able to cache very small pages.  Pressing the “Back” button almost always causes the previous page to be retrieved from the cloud rather than from cache.  This slows down browsing.  What’s worse  is that if you leave the browser running in the background to briefly use another app, even just to read a text message or an email, when you return to the browser it reloads the page from the web again.  This completely breaks sites like Google Reader and Twitter where the reloaded page  will usually contain different information than what you were reading before you switched away from the browser.  I didn’t see any improvement with 2.0 browser still reloading pages that should have been cached.  I was also hoping for multi-touch pinch zooming and full Flash support but neither seemed to make the cut.

There are some new features in the 2.0 Browser.  Double tap zoom is now officially supported, along with HTML5’s <video> tag.  Speaking of Web standards, the browser’s now supports the HTML5 draft spec’s Client-Side Database,  Application Cache, and  Geolocation  APIs in addition to maintaining backward compatibility with support for the Gears equivalents.

3 thoughts on “First Look at the N900 MicroB, Fennec and Droid Browsers”