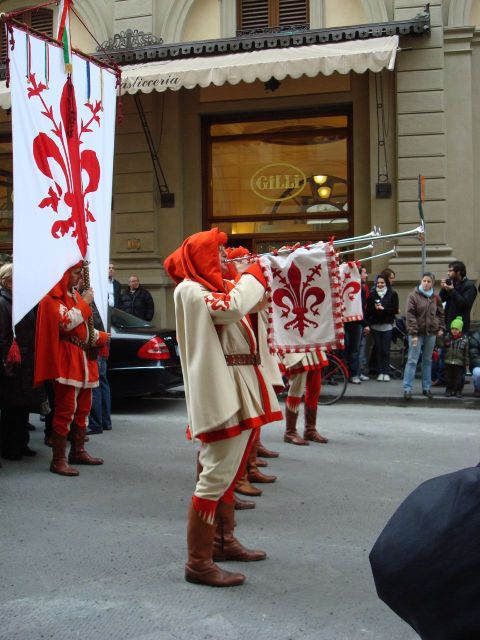 Those horns are actually part of the Scoppio del Carro (“Explosion of the Cart”) Easter procession in Florence but here they herald the arrival of the 127th Carnival of the Mobilists. This carnival happens every Monday somewhere on the web and is a celebration of the best writing on mobile technology. I’m honored to be hosting it again here at WapReview. There were a lot of great entries this week, I’ve tried to pick the best of the best for you.

First up is Dean Bubley at Disruptive Wireless with a post about the emergence of 900mHz as a second 3G band in Europe and elsewhere. Click here to read about the networks that are using 900, the phones that support it and its potential for increased coverage.
—
At Little Springs Design, Barbara Ballard looks at the effects that design, especially good design, can have on the all important ROI (return on investment). Having trouble selling expenditures on design resources to the bean counters at your company? Barbara offers some good arguments on why skimping in this area is not cost effective.
—
Mobilestance‘s Jamie Wells is taking the summer off to get married and go on a cruise among other things. As a parting gift he offers readers a casual web game with a decidedly mobile theme, Android Invaders.
—
Blogging at Technology, Mobility, Usability and other Musings, Sachendra Yadav takes an in depth look at mobile local search. He offers some suggestions on how local search should work – right down to the point of defining a model user interface.
—
Reflections on things mobile‘s Geoff Ballinger describes his experiences (mobile version) with using Mippin to mobilize his blog, including a bit of advice on getting appropriate advertising on a Mippin site.
—
Andreas Constantinou at Vision Mobile is conducting a survey aimed at mobile application developers. He’s gathering data on how developers feel about the features, ease, costs and support associated with each of the major mobile platforms; BREW, S60, UIQ, Android, Windows Mobile, Java, Palm, Linux and Flash Lite. Hate taking surveys? To entice you Andreas is offering the chance to win $1000 in a prize drawing open to those who complete the survey.
—
Writing at GoMo News, Rob Knight takes a critical look at Peter Gabriel’s new music, film and video recommendation web service The Filter which also has a mobile component. Will The Filter usurp Last.fm? Read Rob’s evaluation.
—
At Mobscure, Richard Smith presents the results of research his company did recently where a focus group of mobile savvy users were given N95’s loaded with advanced web based applications and assigned to collabrative content creation tasks. The results are interesting and a must read for anyone creating mobile applications.
—
In the provocatively titled piece It’s Good to Stalk, Omio‘s Ernest Doku looks at the latest entry in the burgeoning field of location aware mobile social software, a product called SNIFF.
—
James at mjelly reports from last week’s Mobile Monday London where the theme was Mobile Media and Marketing and presenters included BBC, Financial Times and others. What do these industry heavyweights see in the future of media on mobile? Read Momo London June – Whassup in Mobile Media and Marketing.
—
Fashion police alert! Improbulus reviews an interesting belt with integrated gadget holder called the Urbantool HipHolster at, A Consuming Experience. While Improbulus seems ambivalent about the Hipholster’s aesthetic properties she has real problems with it’s functionality. Read why in this no holds bared review.
—
MobileSlate‘s Eric Chan reports on Warner Brothers president of Digital Distribution, Tom Gewecke’s Keynote at Mobile Entertainment Forum’s MEFCon. Find out what Warner thinks of the future of mobile video including distribution and DRM. Is Gewecke moving Warner in a more progressive direction with regards to digital media rights? Read Eric’s analysis to find out
—
Andreas Bossard at News of the Future has fired up the time machine again! He reports to us from 2010 in the where (when?) Sony Ericisson has launched a handset with an amazing feature that will revolutionize scholarship.
—
London Calling‘s Andrew Grill does a thorough review with lots of screen shots of a location aware version of Microsoft Live Search that launched recently in the UK. Microsoft and Sprint have been doing this for a while here in the US, nice to see the idea is spreading.
—
At SmartMobs, Melanie McBride looks at the 3G iPhone’s chances for success in japan. Will be a hit or a dud ? You’ll have to read Melanie’s post to find out.
—
Chetan Sharma at Always On Real-Time Access has a post on last week’s Mobile Monday Amsterdam which had a theme of mobile advertising. It sounds like a great event with 450 attendees and an impresive spraker list including Doc Searles, Russell Buckley, Blyk’s Antti Ohrling and Chetan. Besides reporting on the various presentations including a link to the videos, Chetan has embedded the video and slides from his own presentation making for a nice little bit of multimedia. Great stuff and my pick for Post of the Week.
—
Well that’s it for this week. Next Monday head over to Ubiquitous Thoughts for a brand new Carnival.

9 thoughts on “Carnival of the Mobilists is Here”