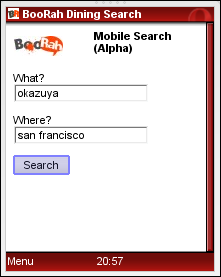 BooRah (boorah.com/restaurants/m/) is a crowd-sourced restaurant review site along the lines of Yelp (review) and Zagat (review) but with a couple of differences. First, instead of relying only it’s own members to build up a critical mass of reviews, BooRah pulls in reviews from other sites like CitySearch, Insider Pages and Yahoo Reviews. The other difference is that BooRah ignores the scores and star ratings in these reviews. Instead it performs a structural and semantic analysis of the review text and extracts whether the reviewer is expressing a negative (Boo) or positive (Rah) feeling on three specific aspects of the dinning experience; service, ambiance and food. A restaurant’s Boos and Rahs are used to create an overall percentage rating and separate ratings in each category. There’s a good interview with BooRah co-founder and CTO Nagaraju Bandaru by Peggy Anne Salz at mSearchGroove where he explains BooRah’s methodology in more detail.

Bandaru stresses that the site still Alpha and that there is some missing functionality but I think it’s actually pretty good. I tried a few searches for specific restaurants and found BooRah useful. Unlike Yelp, Boorah seems very good at accurately locating the closest restaurants to a specific address, zip code or intersection. It found over a dozen sushi places within 3 miles of my house.

BooRah reviews tend to be somewhat dry and factual compared with the personal vibe and amusing chatty reviews you find on Yelp, but that’s not necessary a bad thing. As for the BooRah ratings, I didn’t always agree with the scores of specific restaurants, but overall I found them pretty accurate and as good or better than any of these review sites. 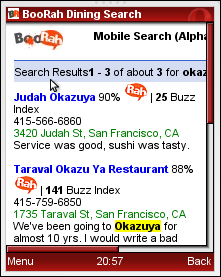 BooRah started on mobile and offers both a mobile web site and an SMS search as well as a PC web site. Boorah’s mobile site takes the minimalist approach of doing one thing well, its just a front page with two text boxes labeled “What?” and “Where”. The parser behind those search boxes is actually quite sophisticated. “What” can be as varied as “Sushi”, “the name of a restaurant or things like “business meal”, “romantic date” or “view of the GG Bridge”. “Where” can be a zipcode, city, neighborhood or intersection. BooRah delivered remarkably relevant results for all these types of queries.

Results on the mobile site are compact, a query returns a list of restaurants with the Rah rating, address and phone number and a forty word or less excerpt from a single review or several even shorter snippets from multiple reviews. Clicking on a result will give you a slightly expanded review and a field to enter a from address for text-mode driving directions (by Google) to the restaurant. It’s a simple, effective mobile interface. I’d like to suggest a couple of enhancements though. It would be nice to be able to drill down a into the reviews with a “more…” link to read through several complete reviews, paginated of course. Also, the phone numbers are not click to call, a pet peeve of mine. The ability to make a call is such a simple, powerful feature that users expect to see on a mobile site whenever a phone number is displayed. Hopefully this is one of those missing features that will be added soon.