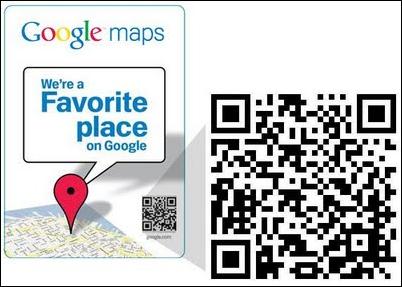 Yesterday Google did something that should light a fire under the lagging adoption of mobile barcodes in the US.  They are sending window decals featuring a QR code to the 100,000 US businesses that are  most searched using Google.  The decals also have the Google Maps logo and identify the business as a “Favorite Place on Google“. 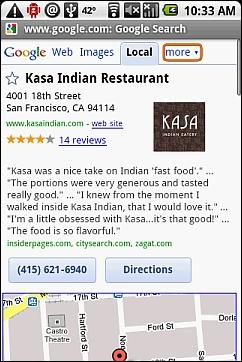 Users with QR code readers on their phones can point the phone’s camera at the QR code, press a button and be taken to a mobile web page with user reviews, click to call number, Google map and a link to directions to the establishment.

I’ve been a big fan of  QR codes since seeing them in action in Japan a number of years ago. Virtually every handbill, poster, business card, newspaper ad, bus stop and store front in Japan features a QR code that points at a mobile web page.  The Japanese have been using QR codes for over 10 years and almost every Japanese market mobile phone has a built in code reader application.

Mobile barcodes are such an easy, inexpensive and practical way of  sharing and promoting mobile sites.  I really expected that they would take off in the West. But adoption has been slow largely due to the lack of bundled readers in phones, turf wars between vendors of competing barcode formats and the seeming reluctance of mobile operators to adopt something that they did not “own” and that would make it easy for users to stray off the operator’s mobile web deck.

Google’s Favorite Places should do a lot to drive enthusiasm for QR codes.  The biggest remaining block to immediate adoption is the lack of bundled readers. Even Android phones require that the user download and install a reader app.  I expect that Google will soon bundle a reader with the Android OS.  In the meantime Android phones can use the free “Barcode Scanner” app in the Android Marketplace. For the iPhone, Google recommends the QuickMark app.  QuickMark normally costs $1.99 but Google has cut a deal with the vendor to make it free to the first 40,000 people who download it.

There are also QR Code readers available or Windows Mobile, Symbian and most Java camera phones.  Google recommends BeeTagg and NeoReader. If neither works with your phone  there are dozens of other readers available. Qrme.co.uk and mobile-barcodes.com are a couple of sites with links to many different readers.

A word of warning though, the Favorite Places landing pages are currently Android and iPhone only! Although Google’s announcement states that BeeTag and NeoReader work well with their decals I found that the mobile pages which the decal’s QR codes link to only appear on iPhones and Android devices.  The Nokia Reader on my N95 correctly decoded the URL in sample decal in Google’s announcement.  But when I opened that URL in the Nokia Webkit based browser was I redirected to the generic Mobile Google search page. Based on testing with the User Agent Switcher Firefox Add-on it appears that this redirection also occurs with  BlackBerry, Windows Mobile and Java feature phone browsers. Browser sniffing and mandatory redirection to irrelevant URLs is evil. As a browser vendor itself Google, should understand the importance of thematic consistency – a URL should deliver equivalent content on all devices.  Hopefully this is just a rush to launch oversight and Google will quickly fix Favorite Places so that it works will all browsers.