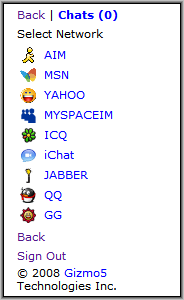 Gizmo5 has a new mobile web front end to their IP based Internet telephony and messaging platform. It’s sort of the Swiss Army Knife of mobile web based communications. Gizmo lets users communicate by IM on nine different networks and by SMS, e-mail and voice – all from a single integrated contact list.

Gizmo5 is often compared with Skype. Both let you make free computer to computer calls and low cost calls to phones worldwide. Unlike Skype though, Gizmo5 is based around open protocols, SIP for VOIP and Jabber for IM. This has the advantage of allowing Gizmo to connect with other networks using these protocols including Yahoo, MSN,  AIM, ICQ, iChat, Jabber, QQ, XMPP, Gadu-Gadu and MySpace IM.

Gizmo has native clients for Windows, Mac and Linux PC’s and S60, Palm OS and Java phones. The PC and S60 clients support IM and SMS over either WiFi or GPRS/UTMS data and voice calling using WiFi only.

The Java ME and Palm clients also do IM and SMS over WiFi or the mobile data network. They don’t offer true end to end VOIP calls but can be used to make cheap international calls using a callback scheme like that of Talkster (review) or Rebtel. To use this feature you enter the phone number you want to call and Gizmo5 calls both your phone and the other party’s. The call travels over the mobile network from your phone to a Gizmo access point in your country then over the Internet to another access point near the recipient.

For users of phones that don’t support any of Gizmo5’s clients the new mobile web version at giz5.com.  mirrors the features of the Java and Palm clients; IM with any of the messaging platforms Gizmo5 supports plus voice calls using the same call back scheme  and the ability to send e-mail or SMS to any of your IM contacts. Of course, the callback option doesn’t make sense for domestic calls in the US where we pay for incoming calls but in most of the world incoming calls are free making Gizmo5 cheaper than calling out using the mobile network.  For international calls Gizmo5 is a money saving choice anywhere with rates starting at 1.8 cents a minute.

The mobile web based interface is simple but quite usable. You can view all your contacts on all networks on the same screen or filter the list to show only contacts who are online. Gizmo5 supports multiple simultaneous conversations on multiple networks. A particularly nice feature is that if an IM contact is offline you can send them a message via e-mail or SMS or make a phone call. 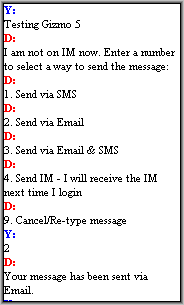 For a company whose main product is VOIP calling, the way that calls (and SMS) work in the mobile web client is a little strange. It’s really not set up for making calls or sending texts to arbitrary numbers. In order to text or make a call to someone who is not a contact you have to first select a contact. You can then edit the contact’s phone number to the one you want to call or text. Seeing as Gizmo5 charges for most calls and SMS you would think that they would make it easy to enter any number directly without associating it with a specific contact.

Gizmo5’s rates for voice calls start at 1.8 cents per minute with an additional 1.9 cents per minute added for  calls made using a callback; which includes all calls from the  mobile web, Java or Palm clients. That’s evidently to cover the cost of the call from Gizmo to your phone. Some typical rates per minute for calls from the US using the mobile web client: to the US 3.8 cents, China 3.7, India 16.5 (mobile 19.5), the UK 3.9 (mobile 22.9). Messaging via IM and e-mail is free but sending an SMS costs seven cents to the US and between 10-13 cents to other countries, not dirt cheap but less than what US carriers charge for unbundled SMS. Gizmo5 gives new users 10 minutes (19 cents) of free call credit to get started. After that you need to buy credits. The minimum amount that can be purchased is $10. Credits expire in one year although they roll over if you purchase more credit before the expiration date.  There doesn’t seem to be any way to buy credits using the mobile web interface, you have to do it from the PC site using a credit card, Paypal or Google Checkout.

Gizmo5 is certainly the most feature rich mobile web based communications application – combining the multi protocol IM of an eBuddy or Heysan (review) with cheap international calling using VOIP plus callback like Talkster (review) or Rebtel. On top of that there’s Gizmo5’s ability to send e-mail and SMS to IM contacts when they are offline. Gizmo5 matches the features of Heysan and eBuddy and supports more networks than either. Gizmo5’s advantage over the other two VOIP plus callback services is less clear-cut. It’s easier to make free calls to landline and mobile phones using Rebtel or Talkster.   You can make free calls on Gizmo to the approximately 11% of US numbers that have “backdoor” VOIP numbers.  To call other phones for free you have to meet some rather complicated and vague requirements.  To make free calls you must:

Admittedly  making free calls with Rebtel or Talkster is limited to certain countries and somewhat complicated; in the case of Rebtel the called party must hang up and then call back using a  special number. With Talkster you have to call a special phone number (which is different for each contact) and listen to advertising messages before the call connects.  But the requirements with the other two services are clearer and much easier to meet than Gizmo5’s. I don’t blame Gizmo5 for this, except for ad supported Talkster, free calls are a loss leading gimmick, any service that lets users make too many free calls will go broke.

If you are willing to pay a couple of pennies per minute Gizmo5’s calling service is easy to use  and rates are competive with Skype’s or Rebtel’s for “standard” calls. But Gizmo is more than just free calls.   It’s really a universal communication tool that supports every method of communication and almost every service. Between the various Gizmo5 installable clients and the mobile web option there is a way to use Gizmo5 on virtually any phone.  There is no risk either as it’s free to sign and there’s no charge for many services including IM.