The 2008 Beijing Olympics are less than a month away, August, 8th.  There doesn’t seem to be much pre-Olympic hype as in years, at least here in the US.  But dedicated Olympics mobile sites are starting to appear.  I’ve found a dozen so far.

The official site of the 2008 games Beijing2008.cn has a mobile edition in English at wap.beijing2008.cn/pams/s.do?p=507&lo=en.  It’s a “one size fits all” wml site but is quite comprehensive with news, schedules and free wallpaper downloads for each sport. The 96×128 wallpapers feature the 2008 Olympic mascots, five good luck dolls representing the five Olympic rings and the five elements of traditional Chinese philosophy; water, metal, fire, wood, and earth.  The official site should be particularly useful if you are lucky enough to actually be in China for the Olympics as it has maps of the Olympic cities and venues, visitor guides, hotel information and a downloadable GPS enabled Olympics Navigation application (Windows Mobile only).

NBC has the exclusive television broadcast rights for the Beijing Olympics in the US. The network has launched dedicated web and mobile (mobile.nbcolympics.com) sites with extensive coverage of the US Olympic Trials. NBC’s site also has TV schedules and background information on Beijing, descriptions of some of the events and photos and biographies of top US competitors.  The well designed site uses browser detection to adapt the content by varying image, page and font sizes to the capabilities of various phones.

A mainstream news site with lots of pre-Olympics coverage is The NY Times’ at mobile.nytimes.com/section?s=84 which features dozens of full length stories and photos from the US’s top daily.

MSNBC’s Olympics mobile page at msnbc.msn.com/id/24110220 has a dozen in depth news items and some nice photos.

Sports Illustrated’s  Olympics coverage is in full swing with over 60 Olympics news items at m.si.com/news/item/to_oly_sports. In spite of its name SI Mobile is text only, no illustrations! 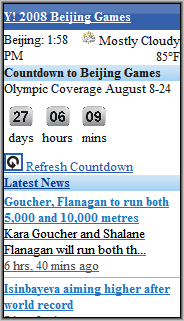 Yahoo’s Olympics site (us.m.yahoo.com/2008games/) features a large countdown clock showing how many days, hours and minutes until the start of the games. Yahoo seems to be focusing more on news and results rather than color features, which is how I like it. The site is currently showing results from the in-progress US Olympic Trials updated every few minutes. Yahoo’s site was created by German mobile development shop NetBiscuits which also did Y!’s March Madness site. The Olympics site has a look and color scheme similar to Yahoo’s new mobile portal Beta. 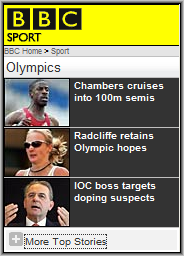 The BBC’s mobile Olympics page  (http://news.bbc.co.uk/mobile/bbc_sport/olympicsport/) has dozens of articles with a sub-section for each Olympic Sport.  The BBC’s sports and Olympics coverage has traditionally been top-notch so this is should be a good choice,  especially for in depth coverage of niche sports.

Soccer fan forum Big Soccer, which has a mobile edition,  has added an Olympics soccer board at bigsoccer.com/forum/archive/index.php/f-1300.html and another one for “not soccer related” Olympics discussions at bigsoccer.com/forum/archive/index.php/f-1066.html.  Neither are very  active yet but there are a few threads up including complaints about NBC’s coverage and people looking for tickets.

Another way to get a nicely rounded selection of Olympics news and results on your handset is to use a news aggregator.  My favorites are Newsvine (review) and Google News (review). Newsvine lists 50 top rated, user selected items under the tag, Beijing-Olympics.

I’ve added Beijing Olympics pages to the Sports sections of the WapReview mobile web directory and Yeswap mobile portal with links to all the sites listed.  If you find other good English language  Olympics news sites, send me a link via a comment or the Contact form and I’ll add them.

2 thoughts on “Get Ready for the Olympics on Your Phone”