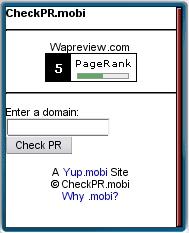 I know that a lot of webmasters obsess over their site’s Google PageRank. It’s one of Google’s measures (on a scale of 0 to 10) of a site’s value. A higher PageRank is supposed to correlate with  high placements in search results and thus potentially greater ad revenue.

Google seems to be devaluing PageRank of late, removing it from Webmaster Tools and publicly stating that it is only one of 200 signals that they use to rank sites and claiming that PageRank is not useful to site owners.

Still, many site owners do track their PageRank and that of competitors sites. The only public source of PageRank from Google is via the Google Toolbar for Firefox and IE.

Google has not published an API for retrieving PageRank, but there are apparently some undocumented APIs as dozens of sites offer PageRank lookup, alternate toolbars and Firefox extensions. Up to now none of these has been very mobile friendly. So Andres at the Mobility.mobi forum created a nice mobile PageRank checker. It’s at http://checkpr.mobi and seems to work very well returning results that match the ones from Google Toolbar for the sites I’ve checked.