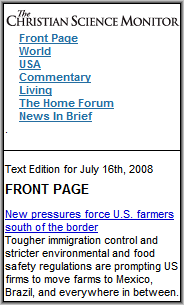 The Christian Science Monitor is a US based, independent daily news paper which is owned by the Church of Christ, Scientist. I’m not a religious person and even if I was I don’t think I’d be a Christian Scientist. I mean, substituting prayer for doctors and medicine when you get sick – no thanks.

But I can’t fault the Church for publishing the Monitor. It’s a well respected news source which avoids sensationalism and jingoism and has long championed civil liberties. The Monitor doesn’t use wire services; almost every story is written by the paper’s own reporters. Its extensive reporting of international and domestic news and politics is balanced, well-written and in-depth. Although owned by a church, the paper doesn’t preach or promote Christian Science beliefs other than a single daily article, which is labeled “Today’s article on Christian Science”, which is linked to at the bottom of the website’s front page. The only noticeable intrusion of Christian Science bias in the paper’s reportage is that it rarely covers medical related news or anything critical of the religion.

Going back to at least to 2003, the Monitor has had a mobile version through the subscription service Avantgo, but also accessible on the open internet at csmonitor.com/pda/avantgo.html.  Early last year the mobile site stopped updating and also disappeared from Avantgo.  The paper’s full site at csmonitor.com works quite well in full-web mobile browsers like Opera, S60WebKit or Safari but not with the built in browsers on most feature phones.  Talk about bad timing, the Monitor killed their mobile site just before the mobile web started to explode thanks to the iPhone effect.

A reader recommended the Monitor’s text edition at csmonitor.com/textedition as usable on phones.  It’s still on the large side at 30-45 KB per page. It barely loads on one of my phones, a Motorola i855 runing Openwave V7,  but it should work on more phones than the full site. The text edition seems to be updated as regularly as the full site, several times a day, and has more content than the old mobile site which was limited to five top stories, although it’s still a subset of the full edition.