I’m not really a Twitter power user but I do follow a hundred or so people, tweet a few times a day and have two Twitter accounts.  My main account is @yeswap.  I also have a @boostapps account where I tweet whenever a new app gets added to my Boostapps.com app store for Boost Mobile prepaid users in the US.  I Twitdroid on Android, Gravity on Symbian and Tweete or Dabr in mobile browsers. So what should I use for Twitter on the N900? 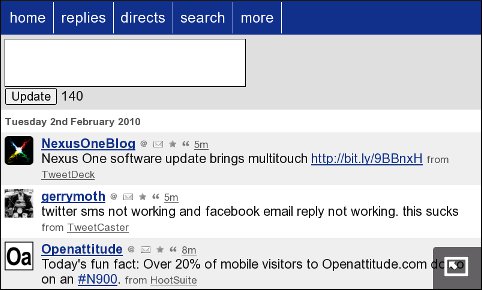 Dabr: I started off with Dabr in “Big Touch” mode (above). Its a mobile web client that I use on all my devices. I even use Dabr on my PC because it’s fast and does just about everything I want in a Twitter client. It shows avatars, supports uploading images with Twitpic, displays thumbnails of  images embedded with TwitVid, Yfrog or Twitgoo and shows embedded clickable YouTube thumbnails. It even has multi account support of a sort. You can log into dabr.co.uk with one twitter account and then open m.dabr.co.uk in a different window with a different account!

But I wanted more. In particular I missed the real time notification I get with TwitDroid, Seesmic or Tweetcaster on Android and Gravity on Symbian.  So I started looking for Maemo Twitter clients and found Witter and Mauku. Both are in the extras-testing repository so they aren’t really intended for end users. Apps in extras-testing could potential adversely effect you N900’s performance and usability and even possibly “brick” it.  Witter and Mauku didn’t seem to hurt my device.  So if you are feeling adventuresome; enable extras-testing, download  Witter and/or Mauku and then immediately disable extras-testing so that you don’t accidentally download or update something from it! 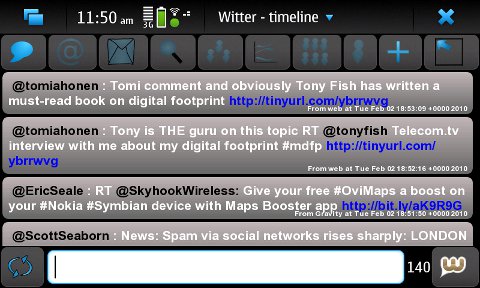 Witter: is fairly full featured with views for replies, DMs, public timeline, friends list, user history and search. It lets you follow and unfollow. Avatars and image embeds are not displayed but you can open links in the browser. Witter supports one Twitter account and one Identi.ca account and lets you toggle between viewing one or the other. As befits its Beta status there are things that aren’t 100% working.  I wasn’t able to get my friends list or the search box to display.

Witter looks (image above) like no other Twitter client I’ve seen with Tweets displayed  on 3D buttons. You can change the background colors (gray looks the best to me) but I didn’t really care for Witter’s look and feel. It does support notifications, but not the way i hoped for.  When new Tweets, DMs or replies come in an alert overlay appears on screen for a few seconds,  there is no vibration or audible alert and no indicator of Twitter updates in the Maemo notification area.  Witter alerts for everything, you can’t configure it to only alert for DMs and/or replies. 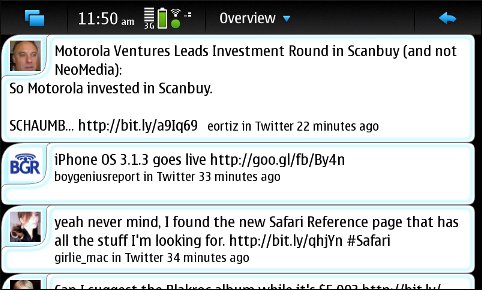 Mauku: (above) looks a lot nicer than Witter and it displays avatars but otherwise its functionality is pretty limited. It basically shows your timeline, your friends list and lets you post new  Tweets. When you tap a  Tweet in the time line you get  a menu that lets you favorite, re-tweet, reply, view the sender’s timeline or open links in the Tweet with the browser.  It can simultaneously display updates from one Twitter and one Identi.ca account intermingled in the timeline. But there is no support for DMs, Twitpic or embeded media. There are no notifications either but Mauku has a neat desktop widget (below) that shows the latest Tweet and lets you step back through your timeline one Tweet at a time. While Mauku looks polished it shows its immaturity in other ways.  Once when I sent a re-tweet Mauku closed itself and another time my timeline overview went blank and refused to refresh until I re-started the app. I saw a number of “Rate limit exceeded” errors as well. Like Witter, Mauku refused to display my friends lists and I’m only following 167 people! 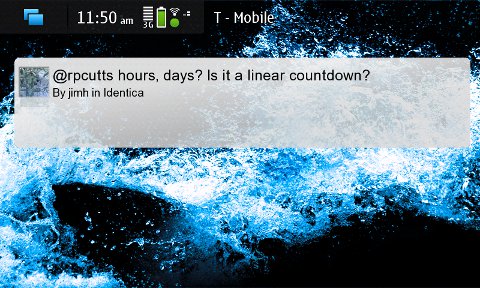 Mauku and Witter are interesting and I hope  that their developers continue to update and polish their apps as both show a lot of potential.  But in the end I found them just too limited for my purposes and went back to Dabr, at least for now.  I think I’ll look at using desktop web clients on the N900. Twitter.com definitely works but I don’t use it on the desktop and don’t see any reason to use it on the N900 either. Splitweet looks promising but I’m open to suggestions. N900 users. what do you use for Twitter?