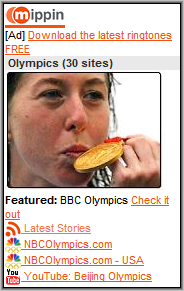 The Olympics Mobile web sites keep on coming. I’ve added four more to the Beijing Olympics category of the WapReview Mobile Directory and the YesWap Mobile Portal bringing the total to 20.

Dameon Welch-Abernathy, aka PhoneBoy, discovered Mippin‘s Olympics page (m.mippin.com/mip/m/cat.jsp?&p=0&cat=Olympics) which aggregates content from 30 different full web sites. I’ve written about Mippin before, it’s a service that lets publishers instantly create mobile sites from an RSS feed. Mippin is more than just a publisher’s tool though, in fact it’s as much focused on consumers of mobile content as it is on creators. From the user’s perspective, Mippin is a mobile web portal offering a directory and search for mobile content. Based on the sites a user visits, Mippin suggests new ones. Registered users can create a personal home page of their favorite content and share it on Twitter or Facebook or by email or SMS. The Mippin Olympics site’s first link, which is labeled, “Lastest Stories” has the aggregated top stories from all sources. Below that are links to each source’s content including such notables as NBC, YouTube, the BBC and the personal blog of sports reporter Simon Barnes of the Times (UK) who is in Beijing.

Naiyer from the Oh! Mobile Directory left a comment of my previous Olympics post pointing to his directory of Olympic sites which includes three new ones from opposite sides of the globe. 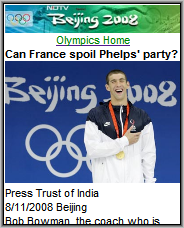 NDTV (New Delhi TV) is a major Indian television  network and online news provider.  NDTV’s mobile Olympics coverage (mobile.ndtv.com/srsstore/showPage.do?siteId=23729&pageId=Home) is very complete with results, photos and wrap ups of the top events with special emphasis on Indian competitors. There’s also plenty of background and “color coverage” stories on topics ranging from the impact of the Olympics on China and Asia to a series of feature articles on Olympic legends like Mark Spitz and Jessie Owens.

The Hindu, one of India’s biggest daily English langauge newspapers, has a small mobile Olympics page at ( pda.thehindu.com/099pdahdline.htm ) with text only coverage of Games highlights.

Back in the USA, The Washington Post has a mobile version of it’s online Olympics coverage at twp.com/item.jsp?key=ol.  The site, which like so many mobile news sites was designed by Crisp Wireless, includes photos, results and news.

One thought on “The Olympics on Your Phone – Part 3”