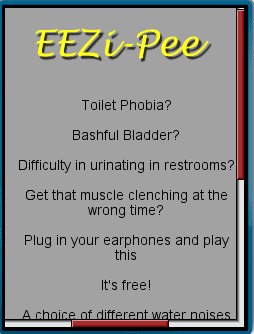 EEZi-Pee (www.EEZi-Pee.co.uk), is a mobile Website designed to help those suffering from paruresis or  bashful bladder, a phobia that manifests itself as difficulty in urinating, particularly in the presence of others such as in public restrooms.

It lets the paruresis sufferer listen (hopefully using headphones in public) to a variety of running water sounds on their phone in times of need. While it would be easy to joke about the condition and this app, paruresis is actually fairly common (one study suggests up to 14% of the population suffer from it). If EEZIi-PEE helps someone I’m all for it.

Unfortunately, EEZi-Pee only seems to work on the iPhone!  The seven different sound files are ordinary mp3s, which the majority of phones would be able to play if they were simple links to streaming or static  files.  But EEZi-Pee doesn’t use links. Instead they use Softpress’s Freeway JavaScript library to create a separate embedded media player object for each mp3.  So there’s an unnecessary dependence on JavaScript, which many phones don’t support. Plus it seems to be iPhone specific JavaScript.  On Android the players are entirely missing and on an S60 phone all seven players try to play at once sounding like hell and locking up the browser.

According to the Softpress site, Freeway is cross platform, although the only mobile platform that I could find mentioned is the iPhone.  I suspect that it’s possible to use Freeway to target other mobile browsers which support JavaScript.  But it doesn’t look like EEZi-Pee made any effort to support anything but the iPhone. So what’s wrong with that?  Well, according to the Tomi Ahonen Almanac 2010, worldwide there are about 3.9 billion phones in use 56% of which or  2.2 billion have a media player.  But only about  34 million or 1.4% of them are are iPhones. EEZi-Pee is missing over 98% of its potential users by not implementing the site  in cross platform manner.