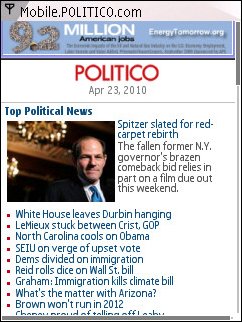 POLITICO is a three year old politics focused daily newspaper distributed for free in Washington D.C. It’s widely read by politicians, lobbyists and other D.C. insiders. The paper’s website, Politico.com has significant national readership with an Alexa US traffic ranking of 287.

The mobile version of Politico is at mobile.Politico.com (first image). It was launched shortly after the PC one in December, 2007. Mobile devices visiting Politico.com are not automatically redirected to the mobile version. But iPhones (and only iPhones) visiting the mobile URL are redirected to a special “Touch Web” version that can be viewed with other browsers by using the URL mobile.Politico.com/iphone/. The touch version works great with the Android browser (second image) but I experienced some rendering issues using it in Opera Mini and with a Nokia N95’s WebKit based browser. Both mobile variants average 40KB, excluding JavaScript which both use but do not require. 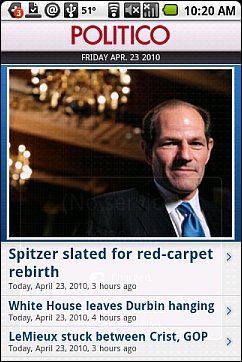 Politco’s mobile editions are somewhat limited. They do appear to include, with one exception, the full text and photos from all the articles and sections on the main site. The exception is Mike Allen’s daily “Playbook” column, arguably the most popular feature on Politico and thus a strange thing to leave out. Other limitations of Politico mobile are the complete absence of reader comments and the removal of all hyperlinks, both internal and external from within news stories. Politco’s stories get hundreds of comments, with the discussions often as interesting as the original articles, so why not include them, even if only in read-only format. The same goes for links, Politco’s stories are loaded with links, almost entirely internal ones to related articles and background information. I don’t understand why Politico would want to strip out links, especially internal links, which help keep readers on the site.

I applaud Politico for recognizing the mobile web’s potential and providing attractive, well organized mobile sites with lots of content. But I’m disappointed by the “dumbing down” of the mobile versions by the removal of important features like comments, links and Mike Allen’s column. Source: Taptu State of The Mobile Touch Web Report (PDF)