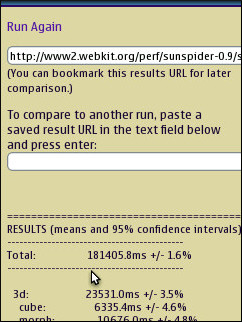 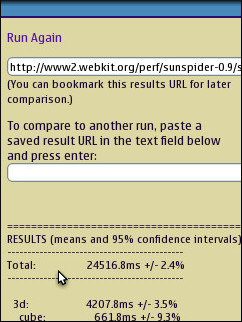 I tested that claim by running the popular Sunspider JavaScript benchmark on a Nokia N95-3, first with Opera Mini 10.1 Beta 1 and then with the new Beta. I think Opera is being too modest. Opera 10.1 Beta 2 was over 7 times faster on Sunspider than Beta 1; 24,516.8 ms vs 181,405.8 ms. Here are links to detailed results on the Sunspider benchmark tests for Beta 1 and Beta 2

I also tried Google’s V8, another JavaScript benchmark.  Both Beta 1 and Beta 2 ran out of memory running the last test of the V8 suite. Google says that test, called Splay, “…exercises the automatic memory management subsystem”.  Higher memory usage is a known issue with both Betas so presumably that is something Opera is working on.  On the six V8 test components that the Opera Browsers did complete, Beta 2 again did much better scoring 289.5 vs. 33.8 or 8.5 times better!

The table below summarizes the two Betas performance and their memory footprint after each test.  Memory was measured with Phonetinfo 1.2 and is the difference in free RAM before starting Opera and after each test.

In real world tests visiting pages that use Javascript extensively, Beta 2’s performance improvement was noticeable However don’t expect to see a huge difference with most pages.

I was very happy to see that my bookmarks and speed dials were preserved when installing Beta 2 over Beta 1, something previous versions of Opera Mobile did not do.  Unfortunately saved passwords are not retained when upgrading.

Make no mistake, this is a Beta version. Opera lists the following known issues in the 10.1 Beta 2:

Other than the out of memory errors running the V8 benchmark, I didn’t experience any  issues with this Beta. However, there are two reports of problems on E-series devices on the Opera Mobile for Symbian forum.  If it does turn out to unstable for you, here are links to download and reinstall Beta 1 and the Opera 10 stable version.