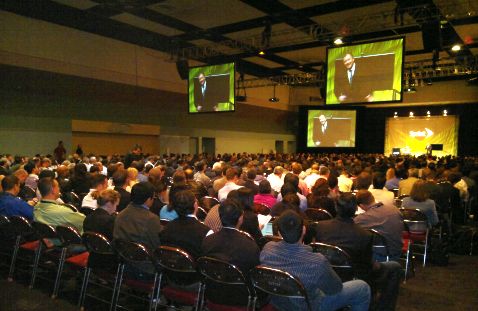 I’m at Sprint’s Developer Conference in Santa Clara today. I’m surprised at how large it is. There are 1500 registered attendees and at least half of the (typically morning adverse developers) showed up for the 9:30 AM opening keynote. Sprint is only the third largest US operator, serving 50 million customers or about 17% of total US mobile users and around 1% of the world’s phones. So why did 1500 mobile developers show up for a relatively minor operator’s event, which is not free?

One reason is that Sprint is probably the most developer friendly of US operators. Their free developer program has been around for ten years and offers an extensive documentation library, free SDKs, sample code and a very active developer forum. Sprint’s handsets also tend to be less down locked and thus more friendly to 3rd party developers than is usual with operator branded devices. Sprint is also a leader in working with business and development shops implementing Machine to Machine (M2M) interfaces over the mobile network. That means things like “smart” electric and gas meters, remote monitoring of industrial and medical equipment, point of sale terminals and vehicle tracking. To encourage M2M R&D, Sprint yesterday opened an M2M Collaboration Center. The center is intended to make it easier for Sprint, its partners and 3rd party developers to create and test new M2M services.

A major announcement at the conference was that Sprint is now a contributing partner together with Intel and Nokia in the open source MeeGo mobile OS project. Based on what I heard, Sprint’s interest in MeeGo, at least initially, is with M2M and embedded applications like vehicle entertainment systems, navigation, tracking and TV set-top boxes. Still, I wouldn’t be surprised to see MeeGo phones and tablets on Sprint some time in the future. I like that MeeGo is that’s a full Linux/X Window distribution optimized for mobile use on low power ARM and Atom processors. Unlike Android and iOS, with MeeGo developers can use any programing language and all the usual kernel APIs and services.

Sprint’s leadership among US operators in pushing M2M and adopting Meego is not surprising. Sprint’s  a technology leader and a bit of a maverick among the US operators, being the first to deploy 2.5G and 4G in the US and one of the few operators in the world operating a WiMax network. Sprint tends to be a price leader as well. It was the first major operator in the world to deliver affordable unlimited everything (voice, text and data) plans and currently has the cheapest such plan at $35/month after loyalty discounts on their prepaid Boost Mobile brand. Of the four nationwide US operators, Sprint tends to have the most afordable data plans, especially on prepaid, where since 2001, they been offering unlimited data for $0.35/day to their prepaid Boost Mobile customers.

Sprint’s smartphone handset partners including Samsung, BlackBerry, HTC and Motorola have a strong presence here at the Devcon doing presentations and conducting coding workshops. I’m attending a introductory Windows Phone 7 development session this evening and there are BlackBerry and Motorola coding workshops tomorrow and one for Android on Thursday conducted by Sprint, Samsung and HTC. I’m looking forward to learning some new tricks and playing with  new toys over the next two days.

One thought on “Sprint Developer Conference – M2M and Meego”