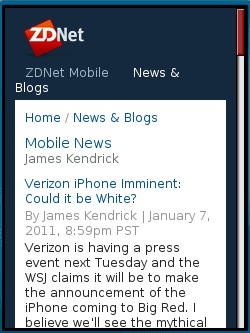 James Kendrick is one of my favorite mobile tech bloggers. He’s also one of the first. As his blog jkOnTheRun‘s tagline used to say, he’s been “using mobile devices since they weighed 30 pounds”. James covers just about every significant mobile gadget and software release with insightful reviews and analysis and wraps up the week’s top mobile news every Friday in a ‘Mobile Tech Manor’ post.

jkOnTheRun became one of the GigaOm networks family of tech blogs in 2008 and James continued blogging under the GigaOm banner. I was surprised and worried when he announced on Twitter last month that he was leaving GigaOm. Happily James has popped up with a new “Mobile News” blog on ZDNet where he continues to post his mobile news and reviews daily as well as his weekly summary, now titled “Mobile News Manor“.

A nice plus of the move to ZDNet is that the blog gains a mobile formatted version, something the GigaOm blogs lack. The single column mobile version retains all the text and image content of the desktop version.

And if you are wondering what happened to jkOnTheRun, it’s still part of GigaOm and in the able hands of long time jkOnTheRun co-author James Tofel and the GigaOm team.