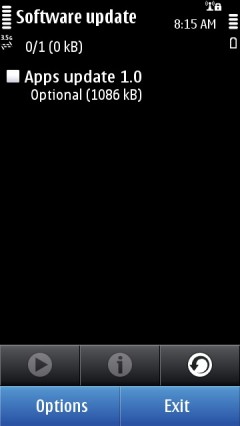 Nokia pushed out a minor application update for Symbian^3 phones yesterday.  I’m not sure if it’s available globally yet or not. It showed up on my US market N8 this morning and users in the UK and India are reportedly seeing it as well. To see if it’s available, run the “Sw Update” app in the “Applications” folder of the N8 or the “Applications > Tools” folder on the C7 and C6-01.

The 1.06 MB update downloads quickly over 3G or WiFi but takes an eternity (about 10 minutes actually) to install.

This is definitely NOT the firmware upgrade (new browser, portrait QWERTY) that is scheduled for this month. There is no change-log and I don’t see any new apps, features or functionality after the upgrade.  Commenters at All About Symbian are reporting major performance improvements in the Photos app, and with auto rotation, swiping between home screens and window transitions. My phone seems to have lost most of the lag before images appear when scrolling rapidly in Photos and rotation does seem to happen almost immediately after turning the phone rather than being delayed for a second.

The big update (PR1.1) is rumored to be on track for release next Monday, the 17th of January.  Today’s update does seem to make the phone snappier and may be a prerequisite for PR1.1 so I recommend installing it if it’s available.

Via: All About Symbian.