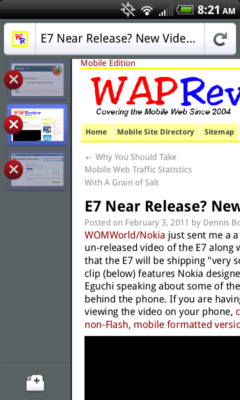 The left menu displays thumbnails of your open tabs

Today I managed to wrest my wife’s HTC EVO out of her hands long enough to install the latest Firefox Mobile and give it a quick run through.  Here are my impressions.

Firefox Mobile has matured quite a bit in the past year.  Performance and usability are generally very good. The latest Beta starts up and loads pages quickly and it responds  to taps and touches immediately.  There’s no lag when flipping left and right to access Firefox Mobile’s signature side menus (images above, below.  The only area found I found that could still use a performance boost is scrolling. Actually scrolling itself is fast and smooth. However, the first time you scroll to a new area of a page, a checkerboard pattern is displayed rather than the expected content.  It takes a fraction of a second before the screen is re-drawn  Not really a problem, but the Android and Opera Mobile browsers on the Evo are able to scroll without displaying blank areas or a checkerboard. 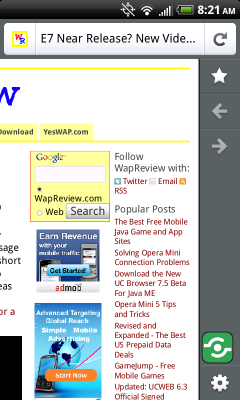 The right menu has buttons for back, forward, bookmarking the current page and opening the settings screen.

Feature wise Firefox Mobile is pretty complete. There’s a password manager and integrated spell checking. Tabbed browsing is supported as is  sharing a link to the current page using email SMS, Bluetooth or any installed app that supports the standard Android sharing API.  Firefox has a couple of features that are found in no other browser. The first is Firefox Sync.  Sure Opera has Opera Link which shares bookmarks, Speed Dials and custom searches across all your Opera browsers and there are many apps  that add bookmark syncing to the Android browser. But Firefox Sync goes well beyond both Opera Link and the Android add-on apps.  It synchronizes  browsing history, bookmarks, open tabs, passwords and form data between as many copies of Firefox (mobile and desktop) as you care to install it on.

The other killer Firefox mobile feature is add-ons, There are over 100 available now.  A couple of my favorite add-ons are  Phony which lets you switch the browser’s user agent so that sites detect it as the Android, iPhone, desktop Firefox or IE browsers and Shareaholic which lets you share links with over 100 addional services including Facebook, Twitter, LinkedIn, Pinbox, Redit.

This is a Beta and while I didn’t notice any stability issues there are a few  missing fetures. There is no Flash support, you still can’t copy text from web pages and text doesn’t reflow to fit the screen when you pinch zoom.

The lack of text copy is a show stopper for me, I use that feature in the Android browser and Opera Mini nearly every day. The ability to copy text is a fundamental browser function and I won’t use any browser that doesn’t support it.  The good news is that Mozilla lists the lack of text copy as a known issue on the front page of the Firefox Mobile Wiki so it is being  worked  and should be added before the final release.

Firefox Mobile does support a rudimentary form of text reflow which is disabled by default (choose “Reformat text on zoom: in the preferences menu to turn it on).  When that’s enabled and you double tap a column of text and the browser will zoom in with the column fitting the screen. I found that double tapping generally resulted in a readable font size on the Evo. But in the few cases where it didn’t there was no way to make text larger without the column width growing wider than the screen.  Text reflow on zoom is one of the best features of the stock Android browser and I sinecerly hope that it gets implemented in Firefox Mobile.

Here are some images showing Firefox 4, Beta 4 in action – Click an image to view full size.

The left menu displays thumbnails of your open tabs

The right menu has buttons for back, forward, bookmarking the current page and opening the settings screen.

Double tapping a column zooms in to display a text fit to screen width.

No text reflow when pinch zooming

Desktop version of FaceBook in Firefox Mobile before zooming in.

Facbook desktop version after zooming in