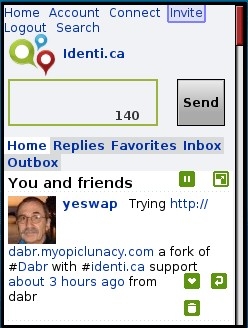 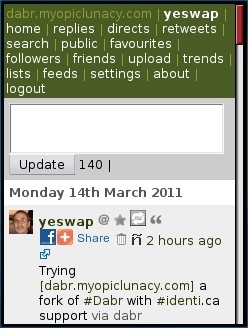 On Friday Ryan Sarver, Twitter’s Product Manager for the Platform / API team dropped a bomb on third party Twitter app developers with a post on the “Twitter API Announcement” Google Group that included the chilling line “…developers ask us if they should build client apps that mimic or reproduce the mainstream Twitter consumer client experience,” he wrote. The answer is no.”

Sarver’s statement was echoed  by recent changes in Twitter’s terms of service. Techcrunch did a comparison of the new and the old TOS and it’s pretty clear that Twitter wants general purpose third party client apps to go away. Existing apps can stay for now but their position seems precarious.

Regardless of whether Twitter brings the hammer down on existing apps, independent developers can’t be pleased and I suspect that at least some will move their efforts elsewhere.

I use Dabr (mobile web), Gravity (Symbian) and TweetCaster (Android) for almost all my interactions with Twitter.  If those apps stop working I’ll be really annoyed.  Twitter’s own mobile web apps are pretty dire, there’s no official Symbian app and the Android app doesn’t work on my Motorola i1, which is stuck forever on Android 1.5.

I  think a lot of Twitter users are starting to look at alternatives to the service. I know I am. In addition to the uncertainty around the apps I use, I don’t like supporting companies that jerk their partners around.  As a Twitter alternative status.net‘s  identi.ca seems to be the leading candidate. It’s open source, offers a superset of Twitter’s feature set, has a substantial user base and a fair number of third part clients (list).

So I’ve been looking at identi.ca mobile web and app clients.  Symbian is covered as Gravity already supports StatusNet and thus identi.ca. On Android it looks like I have a choice of Seesmic, Twitdroid, an official StatusNet client and several others that I haven’t heard of.  I’m trying  Seesmic.  It seems to work well although the process of adding identi.ca account is not at all intuitive. Here’s how:

That leaves the mobile web. Identi.ca has added a mobile view to their web client.  It doesn’t look very good in Opera Mini (first image) but seems usable. Mobile browsers should automatically be detected.  If yours isn’t there’s a “Switch to desktop site layout.” link at the bottom of the identi.ca desktop web page. There’s no separate URL for the mobile version, the switch link uses JavaScript to set a cookie which drives the mobile overide. Identi.ca’s mobile view is very heavy for legacy mobile browsers at 469 KB, including 348 KB in JavaScript. At least everything seems to work with JavaScript disabled.

I also found dabr.myopiclunacy.com, a fork of Dabr that supports identi.ca (plus Tumblr and WordPress). I don’t really know anything about it. The developer’s about page isn’t very revealing  and I can’t find the source code – so use at your own risk.

I’m going to trying moving to identi.ca as must as possible.  It can cross post my notices (what identi.ca calls Tweets) to Twitter. The biggest problem is that most of the people I follow on Twitter either aren’t on identi.ca or if they are they aren’t active so I’m going to be:

I’m hoping you will join me on identi.ca (I’m @yeswap there too) so I can eventually drop Twitter entirely.

2 thoughts on “Moving From Twitter to Identi.ca – Mobile Clients”