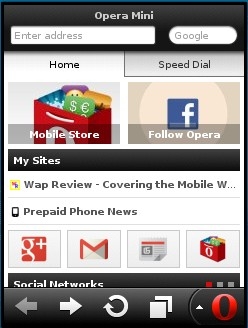 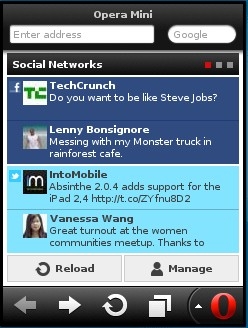 Opera Software has just announced the availability of version 7.0 of the Opera Mini browser for Java ME, BlackBerry and Symbian S60 second edition and latter including all Nokia Belle devices. Opera sent me a pre-release copy of the Java ME version earlier today. Here are my initial impressions.

Opera Mini 7.0 is the release version of the Opera Mini Next Beta, that launched three months ago. It contains many bug fixes and stability improvements, but no new features compared with Opera Mini Next, which added:

The biggest change is obviously the Smart Page. It has three main sections. At the top are large non-removable icons for the Opera Mobile App Store and Opera’s Facebook page (image above, left). Below is “My Sites”, an ever changing dynamic list of your most visited sites. Next come non-editable icons for Google+, Gmail, Google News and a second Opera Store icon  That’s followed by a “Social Networks”   section with items from your Twitter and Facebook feeds (image above, right). The page wraps up with “My News”, links to recent stories from your most visited news sites and blogs and a nicely organized directory of top sites, which is not customizable (image below, left).

The My Sites, Social Networks and My News sections can be independently swiped or scrolled left and right to reveal more items. 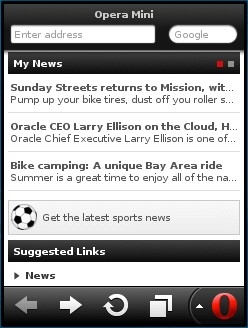 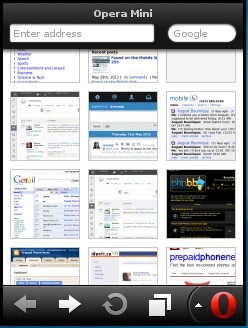 A like much of the Smart Page but I’m a bit put off by the large number of non-editable links and icons. I realize that many of these are paid placements that help support the considerable development and hosting costs of the browser. It is possible to disable the Smart Page entirely. I hope future releases will give users more control of the Start Page content.

The other new features in Opera Mini 7 are all appreciated, especially the ability to have more than 9 Speed Dials.  The bug in Opera Mini Next that caused Opera Link to duplicate Speed Dials seems to be banished. At least I didn’t see it on either of the devices I tried Opera Mini 7 on.

I briefly used Opera Mini 7 on a basic Motorola WX400 Qwerty clamshell that retails for less than $50 on pay as you go and a Nokia Asha 303, a high end Touch and Type S40 feature phone. Both ran Opera Mini Next with no real issues and Opera Mini 7 worked just as well.

I continue to be impressed by Opera Mini’s ability to quickly, accurately and completely render large, complex desktop web pages even on very basic phones. That combined with the speed, data and money saving virtues of a proxy browser makes it easy to see why Opera Mini is one of the most widely used mobile browsers in the world. It’s particularly popular in the developing world where data is slow and expensive and feature phones are still the norm. Opera Mini 7 is a major upgrade that adds significant new features and usability to an already outstanding browser. I recommend it. 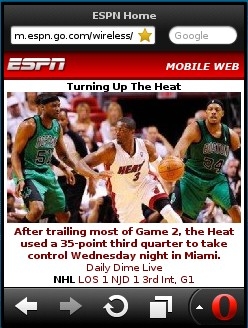 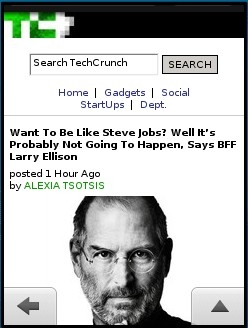 15 thoughts on “Opera Mini 7.0 Now Available For Java ME, BlackBerry and S60”