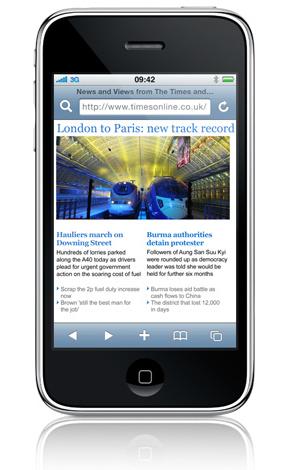 The last couple of days has seen a flood of  headlines in the mainstream and tech press trumpeting  “iPhone Accounts For 50 Percent Of U.S. Mobile Web Traffic” or “iPhone Drives 50% Of U.S. Mobile Web Traffic“.  Sounds pretty amazing and cool for mobile web designers, right? I guess we can stop maintaining those 20 KB page size mobile sites targeted at funky feature phones and devote all our energies to mobile Ajax and the JavaScript rollover effects that play so well on the iPhone.

Unfortunately it’s not true.  The 50% number comes from the latest AdMob Mobile Metrics Report (PDF).  Nowhere in that report does it say that the iPhone accounts for 50% of all U.S. mobile web traffic.  The 50% number refers to the Apple device’s share of ad requests from smartphones.  Smartphones as a group make up 33% of total U.S. ad requests so the iPhone’s true share of US mobile web traffic is about 17%.  Actually it’s somewhat less than that as Ad Mob’s iPhone numbers include requests from iPhone applications as well as browsing.  iPhone apps are a very impressive and game changing phenomenon but are irrelevant to mobile browsing market share.

Worldwide the iPhone accounted for about 33% of smartphone ad requests.  But again smartphones were responsible for about 33% of total mobile web traffic so the iPhone’s share was about 11%.  If we add traffic from the iPod Touch to the mix, which seems reasonable as it has the same browser as the iPhone, Apple’s total share of AdMob requests rises to 17.9% worldwide and 27.1% in the US.  Again, these figures are inflated by requests from in-app advertising.

While the 50% figure isn’t really true, the Phone is a watershed device that  has turned the industry upside down with it’s intuitive, finger friendly touch UI and PC like a browsing experience that most users find as useful and compelling as the web on a PC.

So web designers absolutely need to insure that their sites deliver a great experience on the iPhone and Touch, but they shouldn’t neglect the other devices that still drive over 82% of mobile web traffic either.